A man has lost his life after he reportedly drowned in a heavy flood in Abuja. 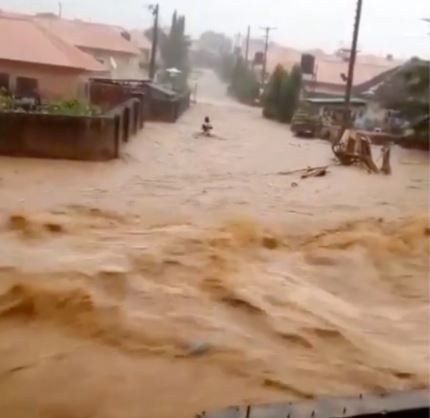 A man who got swept away by a heavy flood in Abuja  on Thursday morning, August 27 has been reported dead.

The moment the man drowned was caught on video. In the tragic video, the man is seen wading through the brownish flood water that extended above his waist. He appears to miss his step and then struggles to regain balance, but the current was too heavy and he was swept away in seconds while screaming for help.

The man's body was found this morning, August 27.

Eyewitnesses claim he had been warned not to go in the water but he didn't listen. He was also reportedly drunk at the time he ventured into the flooded street.

Below is a video showing the moment the flood swept him away;

"Help!" man screams for help as flood sweeps him off in Trademore Estate, Lugbe, Abuja. . The tragic incident occured on Wednesday, August 26, and the body of the man was reportedly recovered today, August 27. . Eyewitnesses claim he was drunk and they had warned him not to go out in the flood but he didn't listen.