Horrific Tragedy Averted As Truck Rams Into A Building In Lagos


The incident occurred at about 4.19 pm, on Ikorodu/Mile 12 Road, inward Owode-Onirin area. 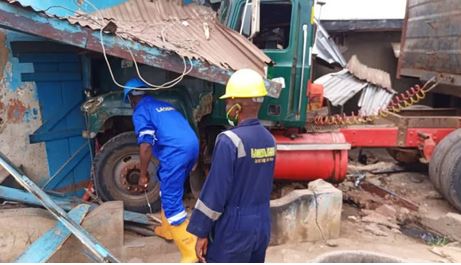 According to Vanguard, what would have resulted in the loss of lives was averted, Thursday, in Lagos, during a lone accident involving an articulated truck.

The incident occurred at about 4.19 pm, on Ikorodu/Mile 12 Road, inward Owode-Onirin area.

Though the incident led to gridlock on the axis, there was no loss of life.

According to eyewitnesses’ account, the empty containerised truck was on its way to Lagos when it veered off the road and crashed into a residential building.

Fortunately for the occupants and truck driver, they all escaped unhurt.

An eye witness, Alhaji Arinola Abdul, said distress calls were quickly made to emergency responders and the situation was brought under control.

The Head, Public Affairs, Lagos State Emergency Management Agency LASEMA, Nosa Okunbor confirmed that there was no loss of life, “no injuries or loss of life were recorded, as the driver and residents of the residential building were unhurt,”

However, he said investigations conducted revealed that the immediate cause of the accident was due to recklessness of the driver.

At press time, normalcy has returned to the road as the truck has been towed off the scene.