The suspects have been apprehended by the police after they killed a pensioner after extorting the sum of 1.2Million from the family. 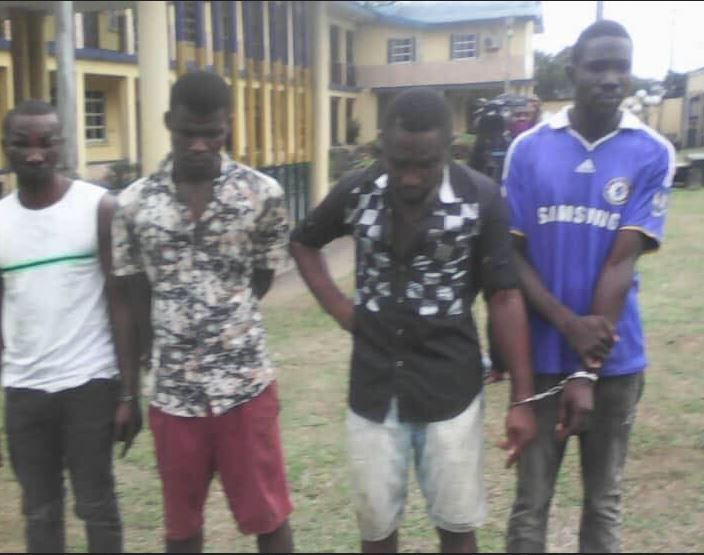 The Rivers state police command has arrested four persons and tracking more at large in connections with the kidnap of 65-year-old Sokari Braide who died two days after being released following payment of N1.2Million ransom.

The victim, a pensioner, was abducted August 8 by gunmen who originally targeted his evasive wife, Beatrice, in an ordeal in which one her relatives, Davies, aka Biggy was shot dead before her husband was whisked from their Elechi Waterfront Phase 2, Diobu, Port Harcourt home.

Police Public Relations Officer (PPRO), Rivers Command, SP, Nnamdi Omoni, stated yesterday that, “The abducted Braide was taken to an unknown destination for days. The kidnappers called the family for ransom. Without letting police know, they went to deliver N1.2Million. “They took the money to Andoni under a bridge where they dropped it and the victim not released immediately.

Two days after, they got the husband released, unconscious. That was when the wife alerted the police. We took him to the hospital where he died. “The clue he gave before giving up the ghost led to arrest of the man who went to deliver the ransom.

That man who was go-between the kidnappers and the family compelled the wife not to report to the police about what was happening. “When we arrested him, he opened up. From his confession, we got the principal suspect who confessed being among those that went for the operation leading to kidnap of that man. The investigation is ongoing. Some other names have been mentioned. We will get to the root of the matter.”

One of the suspects who claimed innocence over the matter, however, disclosed that he operates an artisanal refinery at the Elechi Waterfront, adding that the illicit trade popularly known as kpofire was an organised crime in which security agents station to checkmate the crime collect tolls from the operatives. “For every trucking in the place, community boys collect N30,000. Security people collect N15,000 and youths collect N7000”, the suspect disclosed.