Lagos Crash: The Helicopter That Crashed In Opebi Has No Black Box - AIB Reveals


AIB, the investigating body in charge of all aviation-related accidents and incidents in Nigeria, however, noted that investigation has since commenced without the black box. 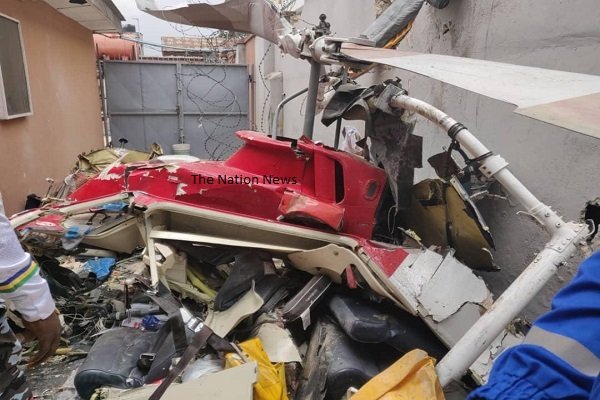 The scene of the crash

According to The PUNCH, a Bell 206-B3 helicopter that crashed on Salvation Road, Opebi, in the Ikeja area of Lagos State, on Friday, has no black box, the Accident Investigation Bureau has said.

AIB, the investigating body in charge of all aviation-related accidents and incidents in Nigeria, however, noted that investigation has since commenced without the black box.

According to the International Civil Aviation Organisation, the United Nations specialised agency for global aviation regulation, black boxes, also known as flight recorders, are one of the most relied upon resources for the improvement of aviation safety. Audio recordings from cockpit voice recorders are valuable for post-accident safety analysis, especially to know what transpired on the aircraft (mostly the pilots’ last conversation) prior to their accidents.

The PUNCH had earlier reported that the copter with Nationality Registration Marks 5N-BQW operated by Quorum Aviation was about two minutes to reach its destination at Murtala Muhammed Airport when it crashed into a fence separating two houses at 16A, Salvation Road.

The copter had three persons aboard and while two crew members died on the spot, the survivor in a critical condition died a few hours later at the Lagos State University Teaching Hospital, Ikeja.

AIB in a statement released on Friday solicited the assistance of the general public to aid its investigation to unravel circumstances which led to the crash.

“We want the public to know that we would be amenable to receiving any video clip, relevant evidence, or information any members of the public may have of the accident; that can assist us with this investigation,” the Bureau said, imploring eyewitnesses to contact it through its social media platforms.

However, speaking in a telephone interview with our correspondent on Saturday morning, AIB General Manager, Public Affairs, Tunji Oketumbi, said, “It is not every aircraft that carries black boxes, especially helicopters, some of them have but some of them don’t have based on the manufacturer’s design. But in this case, the Bell 206-B3 helicopter did not carry any black box.

“A black box is just to show us the way and shorten the duration of investigation and narrow the process but we can still do investigation without it.
“Cockpit voice recorders document the conversation of the pilots but if we don’t have that, we still have the other components of the helicopter like the engine which will help in our investigation.”

Oketumbi added that a preliminary report on the possible cause of the crash would be released but urged the general public not to assume the cause of the accident until the report is released.