Bad News As Universities, Governors In These States Open Up On Plan To Reopen Tertiary And Secondary Schools


About seven states in Nigeria have shared its plan concerning the reopening of schools. 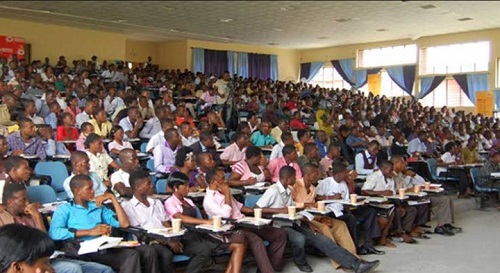 Students
Some states in Nigeria have revealed that tertiary, secondary and primary schools cannot be allowed to reopen.
States like Ogun, Katsina, Bauchi, Enugu, Sokoto, Gombe and Ekiti on Sunday ruled out full reopening of schools, including tertiary institutions, a report by Punch has revealed.
Officials of the state governments, in separate interviews with Punch said they would not follow the Lagos State example.
Recall that schools in the country were closed in March as part of measures to prevent the spread of COVID-19.
But Senior Secondary School 3 students were called back on August 4 to write the West African Senior School Certificate Examination, which started on August 17.
No fewer than 53,727 cases had  been confirmed in the country as of August 29.
Lagos had recorded 18, 104 cases; the Federal Capital Territory, 5,149 cases and Oyo State, 3,107 cases. Also, Kano State had also record 1,725 cases as of August 29.
On Saturday, Lagos State, which was the epicentre of the virus until a few weeks ago, said its schools would resume in September.
The state Governor, Babajide Sanwo-Olu, who disclosed this, said higher institutions would resume on September  14, while the resumption date for primary and secondary schools was tentatively fixed for September 21.
He said the decision was informed by the decline in the number of COVID-19 cases in the  state.
The Presidential Task Force on COVID-19 had on Thursday said coronavirus epicentre had shifted from Lagos State to Plateau State.
On Sunday, the Ogun State Government said it was not in a hurry to reopen tertiary institutions, secondary and primary schools.
The government said it would avoid taking an uninformed decision to reopen schools because Lagos State had made the announcement to reopen schools.
The Special Adviser to the governor on Public Communications, Remmy Hazzan, in an interview with The  PUNCH, said the state government shut the schools based on the Federal Government’s order and would reverse the order based on the same method.
He said “We will look at the various database and use empirical data available.
“The indicator that will determine when we are going to open depends majorly on the Federal Government`s readiness to reverse the order so that we will not be seen as a state that is anti-Federal Government.
“That is on one side. The second one is that even at that we will still rely on empirical data that science provides to guarantee the safety of our children when they return to school. So the fact that Lagos has done it  is not  an indicator that we have to be in a hurry to do it.”
On his part, the Coordinator of the Ekiti State COVID-19 Response Task Force, Prof Bolaji Aluko, said the state government would observe happenings in the secondary schools.
Aluko said, “We won’t follow any person’s timetable. We want to see  events after the WASSCE and the JSSCE, whether students got sick, whether teachers got sick. So far, we have not seen any breakdown of students or teachers falling ill. We are still studying them. If there is no outbreak of illness, then we may start the schools.
“But for now, we have not decided. We have not known the basis for the directive in Lagos State. But there is the possibility that our tertiary institutions resume this year. I think secondary schools also, before the end of the year. I have asked around, we have not seen any hot spot of COVID-19 as far as the ongoing examinations are concerned.”
The Enugu State Government also said it was in contact with the Federal Ministry of Education, saying there were no plans to reopen schools yet.
The state Commissioner of Education, Prof. Uche Eze, stated this in a reply to The PUNCH’s inquiries about the state’s plans for school resumption.
He stated, “No decision to that effect yet. We are in close touch with the Federal Ministry of Education.”
In his  response to an SMS sent to him,  the Bauchi State Commissioner of Education, Dr Aliyu Tilde,  said, “Bauchi does not follow Lagos. We will open when we are ready.”
In Katsina State, the Public Relations Officer in the state Ministry of Education, Mallam Salisu Kerau,  said there was no notice yet on resumption of schools in the state.
“No notice yet on resumption of schools and higher institutions in the state. The public will be duly informed when they are to be reopened,” he said.
Also, the Gombe sSate Commissioner for Higher Education Dr. Meshack Audu, in an interview with  one of our correspondents, said, “No specific date at the moment, but we are monitoring the situation. Government is not happy that students have stayed at home this long. Government is doing everything possible to ensure their safe return.
“The safety of these students matters most because only the living reads; only the living goes to school. If there is no safety in the schools,  we can’t reopen.”
The Permanent Secretary in the Sokoto state Ministry for Higher Education, Othman Ali, told one of  our correspondents that, “the decision on the likely date for the resumption of our tertiary schools will be decided by the task force  on COVID-19, constituted by the state government.”
On his part, the state Commissioner for Health, Dr Mohammed Inname,  revealed that the state task force on COVID-19 would come up with a position on tertiary schools` resumption in the state this week.
But the Minister of State for Education,  Chukwuemeka Nwajiuba, had in an interview with The PUNCH last week, said there was no new development on the reopening of schools, adding that the status quo remained.
He said, “If we have a new position on that, we will issue it.”
Top Stories