A great tragedy has befallen a Catholic church after a priest slumped and died during sermon. 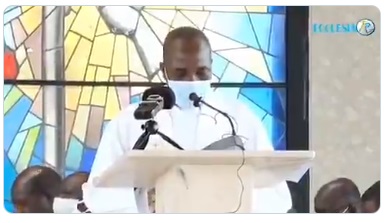 Father Jude slumped and died
A Catholic Priest has lost his life after slumping while giving sermon on the altar during a Sunday mass in Deido, Cameroon.
According to reports, Rev. Fr. Jude, the Spiritual Director of Catholic Men Association (CMA) in Deido, was preaching the Homily yesterday while wearing a face mask before he paused for a moment and appeared to be struggling to breathe.
A few seconds later, the Priest slumped on the altar with other priests seen rushing to his aid as he fell.
Former Chairman of National Human Rights Commission and lawyer, Chidi Odinkalu shared the video on Twitter on Sunday August 30 and wrote, “Rev. Fr Jude., CMA, Spiritual Director of CMA Deido, in Cameroon's commercial capital, Douala, was preaching the Homily at Mass earlier today when this happened #RIP.'
Watch video: