The three men were apprehended for stealing chickens belonging to a retired police officer. 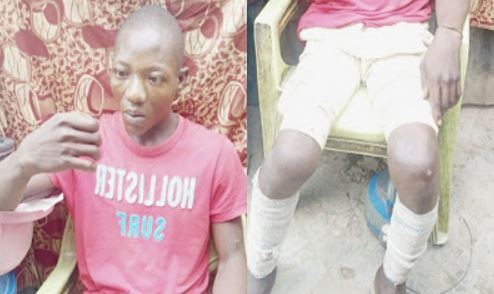 When Ibrahim Kapala, Ibrahim Babangida and Abdulwahab Bello were arrested by the police in Bauchi on suspicion of stealing chickens, they had no idea all their lives were going to be on the line as a murderous DPO, Superintendent Baba Ali Mohammed, allegedly beat two of them to death.

With two broken legs, Abdulwahab Bello considers himself lucky to be alive after seeing a police officer beat his two friends, Ibrahim Kapala and Ibrahim Babangida to death in Bauchi.

The three men were apprehended for stealing chickens belonging to a retired police officer.

Abdulwahab did not know that the chickens were stolen.

He did not imagine that they would nearly cost him his life and the lives of his two friends.

“I was on my way when I met two of my friends, Ibrahim Kapala and Ibrahim Babangida, who were looking for buyers of chickens and I suggested a customer at the Muda Lawal Market.

“I didn’t know that they were stolen chickens,” he said.

After accompanying his friends to sell the chickens, he went about his business until he saw a team of policemen in a tricycle alongside his friends.

He was arrested and driven to the Township Police Station, in Doya Area of Bauchi where the police also brought the man who had bought the chickens.

Apparently, Ibrahim Kapala and Ibrahim Babangida had broken into the home of a retired police officer and stole five chickens.

The owner reported that they had taken 24 chickens but would later say he had found 13 of them.

The DPO, Superintendent of Police, Baba Ali Mohammed, however, seemed to have taken the theft as personal and demanded payments for the chickens, alongside bail money from the suspects.

“They said that we should pay the money for the chickens and my mother brought them N4, 000,” Bello said.

“The DPO told my mother to pay another N2, 000 for my bail before I would be released.”

Since his mother did not have any other money to give the police, Bello was detained alongside the other suspects despite paying for the chickens.

However, their real ordeal was about to begin.

“We were ordered out of the cell and he asked us to go behind his office where the DPO asked us to lie face down on the ground.

“He ordered that Ibrahim Kapala should be tied up,” he said.

Bello, and his friend Ibrahim Babangida, watched SP Baba Ali Mohammed went and fetched a broken pestle which he used to beat Ibrahim Kapala, who was tied up.

He struck the victim on the legs and broke both his legs while other policeman stood by and watched.

“In the process of beating him, he was saying that from today stealing chickens has ended and he continued beating him until he fainted.

“After he fainted, he started kicking him with his foot even though he was unconscious, until he died,” Bello said.

The DPO ordered for the next suspect to be brought forward.

“Immediately he was brought, he descended on him also and broke his legs by using that same pestle.

“He also used it to hit him on his chest and his back.

“The victim too fainted,” Bello said.

With the two suspects lying lifeless on the ground and the DPO screaming at them “to die,” Bello feared that he too would suffer the same fate.

“When it came to me, he used the same pestle to hit me continuously and broke two of my legs where I sustained two fractures on one leg,” he said.