Tragedy As Mother Reportedly Kills Her Five Children Inside Apartment


A 27-year-old woman has reportedly killed her five children before attempting to take her own life. 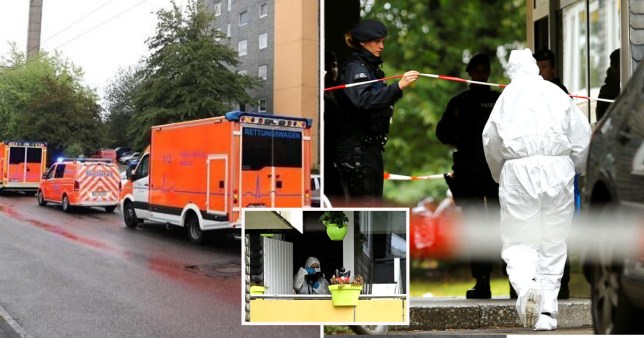 Scene of the tragic incident
Many people have been left shocked after the bodies of five children were found in a private apartment in a large block of flats in the western German city of Solingen.
According to MetroUk, Police suspect the 27-year-old mother of killing the children before attempting to take her own life at a train station in nearby Düsseldorf.
Few details have been provided, with no information about the cause of death. A sixth child, reportedly an 11-year-old boy, was said to have survived. The bodies of three girls and two boys were found, aged from one to eight.
Emergency services were called to the residential block in the Hasseldelle area of the city on Thursday afternoon.
They were alerted by the the children’s grandmother, who lives nearly 40 miles away, local media reported. Rescuers were said to be traumatised by what they found in the building and shocked by the state of the flat. They reportedly tried to resuscitate the children but arrived too late to save their lives.
Stefan Weiand, a police spokesman at the house, said it was a ‘tragic situation’ and added that the mother was not yet in a fit state to be questioned. ‘We are assuming a crime was committed. How and why that happened, we cannot say,’ he told broadcaster WDR.
The mother is believed to have jumped on the tracks at the central station in Duesseldorf, 20 miles from Solingen, but survived and is now in hospital.  She allegedly took another child with her to the station, where she was rescued from between the rails.
German railway operator DB said there were closures in Duesseldorf because an emergency doctor had been needed on the track.
Authorities in nearby Wuppertal are investigating the children’s deaths, with dozens of officers and a fleet of emergency vehicles outside the building.
Police say further details will be revealed later today, but how the children died is not yet known. Jürgen Hardt, a member of the German parliament, said he had reacted in ‘horror’ when he heard the news of the children’s deaths.
‘I wish the emergency services and the police strength as they deal with the case, which will affect them deeply as well,’ he said.
Top Stories