Pastor Ibiyeomie attacked Daddy Freeze, calling him a bastard for daring to challenge his father in the Lord, Bishop David Oyedepo. 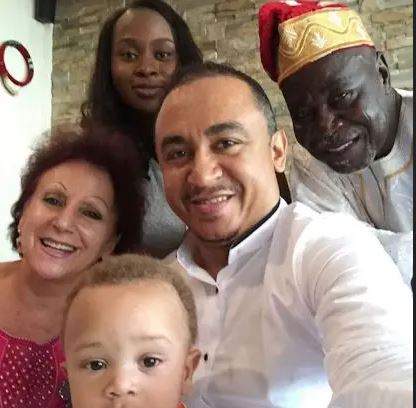 Controversial OAP, Daddy Freeze has released photos of his parents, in response to Pastor David Ibiyeomie’s utterances and “bastard” accusations.

Ibiyeomie had in a viral video attacked Daddy Freeze, calling him a bastard for daring to challenge his father in the Lord, Bishop David Oyedepo.

Daddy Freeze, reacting to the video stated that even with a gun to his head, he would continue to preach the truth about Christ, the scriptures and Christianity.

He said he never insulted Oyedepo, but only drew his attention to Ephesians 5:21 after Oyedepo quoted verse 22 of the same chapter on submission of the woman to her husband at home.

“I found it very devastating that just to get at me, Pastor Ibiyeomie, would drag the whole Somali nation, I am very proud to associate with Somalians because they are very beautiful people. Beautiful African people like you and I. It is hate speech to undermine them with derogatory words ‘Is he not just a Somalian? To all my fans and followers in Somalia, I love you all and proud to be associated with you, even though by birth I am not a Somalian; my mum is European, my father is Yoruba.”

The Nigerian-Romanian broadcaster and radio talk show host, Daddy Freeze has now gone on to publish photos his parents.