The Story Of Gana, A Bully Who Became His Community's Protector And Then Gangster


The late Gana was given a contract by the Board of Internal Revenue Service (BIRS) for him to eke out a livelihood. 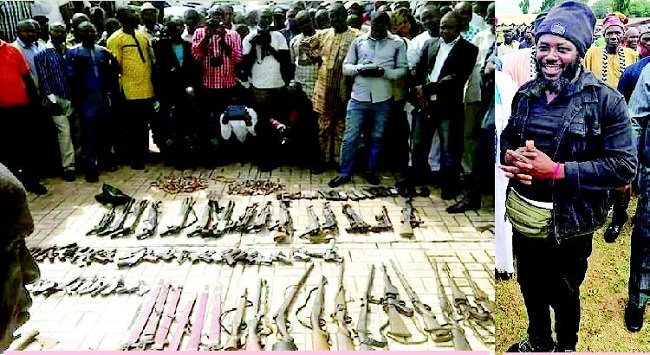 He was a terror, but his killing on a day he was to embrace peace has raised eyebrows. The late Terwase Akwaza, popular known as Gana, graduated from being a bully to freedom fighter and ultimately a gang leader with a wide territory, write UJA EMMANUEL and SANNI ONOGU

***
Terwase Akwaza, popular known as Gana in mind, did not see death coming. But, on Tuesday evening, troops of Operation Whirl Stroke waylaid his convoy on Katsina-Ala- Gboko federal highway and shot him dead.

As a child, he lived in his home town, Gbishe. From tormenting and bullying other children, he grew into a militant and from his Mbayongo clan, the late Gana spread his tentacles to three local government areas: Ukum, Katsina-Ala and Logo.

Initially, he was believed to have a mystical power given to him by his kinsmen to defend his community against external aggression or invaders. He defended his people against herdsmen. His community shared boundaries with Taraba State and the neighbours were always taking up arms against each other. The late Gana later became big-time militant and recruited boys in the three local government area.

He acquired sophisticated weapons and his gang members were said to have been involved in criminal activities like kidnapping, murder and armed robberies.

His gang members made life unbearable for his people and those who plied the federal highway between Katsina Ala – Takum and Katsina-Ala – Zakibiam – Wukari in Taraba.

Ukum, Logo and Katsina-Ala local government areas that made up Sankera are known for massive yam production, but the activities of Gana led to the yam markets in these areas being deserted. His group sacked markets officials and assumed control, collecting levies and taxes in the markets.

Things worsened when some of his gang members parted way with him and formed their terror group.

The late Gana and his gang were fingered in every criminal activity in the Sankera axis.

When he was declared wanted, nobody was able to arrest him. Many attributed this to his supernatural power to appear and disappear. The police, soldiers and Air force attempted to apprehend him but failed.

In 2015, Governor Samuel Ortom granted him amnesty and he surrendered massive arms and ammunition alongside his gang members who denounced criminality.

The late Gana was given a contract by the Board of Internal Revenue Service (BIRS) for him to eke out a livelihood.

Few months after he repented, he was accused of killing Mr Denen Iguana, the governor’s aide on security. Attempts to bring him to answer questions on the killing of Iguana failed. He parted ways with Ortom and returned to the trenches. A 10 million bounty was placed on his head for anyone with information that may lead to his arrest.

Last week, Ortom visited Ukum and Katsina-Ala local government areas to inaugurate projects. During the visit, elders and stakeholders in Sankera axis pleaded with Ortom to grant the late Gana and his gang members another amnesty which he obliged.

Tuesday was set for the most wanted criminal gang leader to surrender at the Government House, Makurdi. He and his gang members assembled at the Katsina-Ala township stadium and were being conveyed to Makurdi before soldiers mounted a roadblock at a place called Maseje between Ameladu and Yandev roundabout in Gboko Local Government Area and whisked him away. He was later killed.

Ortom yesterday expressed shock the way Gana was killed by soldiers. He said he was waiting for an explanation from the Commander of 4 Special forces Command in Doma, Nassarawa State, Maj.-Gen. Moundhey

Gadzama Ali before he would know what to say.

Suswam, in a statement in Abuja, called for a Judicial Commission of Inquiry to unravel the circumstances that led to the death of Gana.
He urged the people of the state to remain calm saying this is a “time to heal and not war.”

Suswam, who is the Chairman Senate Committee on Power, in his statement titled: “A Time to Heal” said: “At times of uncertainties and crisis, it is incumbent on statesmen to stand out and douse situations especially those that threaten the good order of society.

“The role of elders at times like this is not to inflame passions or fan the embers of hate but to heal all wounds. We are at such a critical juncture in our existence in Benue State.

“The events of September 8, 2020 in my senatorial district where repentant criminals who had surrendered after extensive persuasions were singled out and killed extra-judicially leaves a sour taste and has opened a gaping wound that requires all efforts to heal.

It is no secret that my senatorial district has been traumatised and the people terrorised by activities of criminal gangs led by Mr. Terwase Agwaza alias Gana, for many years.

“The consequences of this endless terrorism have been a steady decline of economic and social activities leaving a once prosperous people pauperised.

“Markets no longer attract traders, schools are closed and farmlands abandoned. Politics in the area has become a war with uncontrolled proliferation of dangerous weapons.

“No responsible leader will idly stand by and watch his community become a theatre of war and a gangster’s paradise.

“It is with this solution mindset that traditional rulers, clergymen and elders of the area decided to utilise means of constructive engagement and dialogue to ensure that youths of the area do not become tools for the destruction of that society.

“The Benue State government along with the security agencies have long desired for a return to normalcy, peace, prosperity and security of the area.

“We have all been in agreement that the continuous existence and activities of gangs are an ill wind that blows no one any good.

“That is why some leaders were mandated to reach out to these outlaws to persuade them to drop their arms and channel their energies towards the rebuilding of our thoroughly battered community.

“We were all excited to see the dreaded Gana come out of hiding to the warm embrace of our traditional rulers, clergy and political leaders at a public function at the Akume Atongo Stadium in Katsina-Ala.

“Our joy was multiplied when we saw him along with his militia surrender arms and publicity renounce a life of crime.

“Our revered King extracted a pledge from him never to turn his kingdom into a wasteland.

“Those present at this forum heaved a great sigh of relief with the thought that finally, a life full of uncertainty has come to an end.

“I was totally dumbfounded to learn that while Gana was on his way to Makurdi, the state capital, to present himself to the governor who was waiting, his long convoy that included political leaders, traditional rulers, clergymen and security agencies was ambushed by allegedly armed soldiers and he isolated and taken away.

“In the midst of the confusion, pictures began to circulate on social media of the bullet-ridden body of Gana with a rifle callously placed on his side.

While I have been consistent in condemning the reign of terror he unleashed on his community, I cannot in good conscience as a lawyer of over three decades and a senior parliamentarian accept cold-blooded extra-judicial murder of an unarmed person as a solution to our security problems.

he lessons of the Boko Haram escalation after a similar murder of its leader are still here with us.

“If this method is accepted as a norm in our country, there will be no need for laws and courts.

“We stand to benefit more by subjecting suspects to due process of the law. Information extracted from a living Gana would have helped security agents get to the root of activities of criminals.

“By this Gestapo style execution, we have missed an opportunity to learn vital lessons about the structure of crime in the area.

“Even war criminals captured alive are entitled to certain rights. The claim that Gana was killed in a gunfight needs further explanation because those who accompanied him and who watched him being taken away, including his Local Government Chairman, do not believe he was in possession of any arms.

“An independent judicial commission of inquiry will unravel facts of the matter to serve as lessons for the future.

“It is unfortunate that this event has escalated tensions in the area and that is why I am using this opportunity to plead with all elders and community leaders to rein in their youths and avoid deterioration of an already bad situation.

There is tension in Sankera axis as many are afraid that his gang members may avenge his brutal killings.