A tragic train accident has claimed the life of a businessman while his child is fighting for his life. 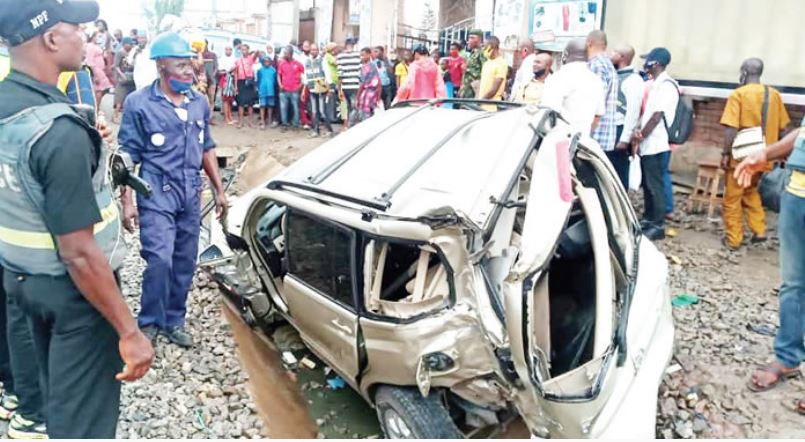 The train crushed the man to death while he ran to save his son inside SUV
A shoe merchant, Christopher Ngobidi was on Monday crushed to death, while his son, Arinze, is fighting for his life in a hospital following a train accident.
According to Punch, the incident happened around the Nigerian Army Shopping Arena, Oshodi, Lagos State.
The train had earlier collided with a white Ford Ecoline 250 bus with number plate, GGE 972 GE, at the PWD area.
The train, while pulling the Ford vehicle, got to the Army Shopping Arena, where Ngobidi parked his Toyota Highlander on the rail tracks.
It was gathered that the Anambra State indigene, a trader at the Arena, was waiting for the gate of the shopping mall to open when he saw the approaching train.
Ngobidi raced to the vehicle to rescue his son,  who was sleeping in the vehicle, but was crushed to death by the train.
However, one of our correspondents, during a visit to the scene of the incident and the shop of the deceased, observed that many stalls around the deceased’s shop were locked.
NgobidiA witness, Hezekiah Adekanmi, said, “The man parked on the rail track while he was waiting for the Arena gate to be opened. While the train was coming with a bus that it had earlier hit, it started honking. But the man, who was not in the car, remembered that his son was inside the vehicle and he ran to rescue him.
“Before he could come out of the vehicle, they were hit by the train and pushed inside a gutter. The man died immediately, while his son was injured. The train still dragged the bus to the Oshodi under bridge before it stopped.”
One of the shop owners around Ngobidi’s shop, Efechukwu Udeh, who described the deceased as a nice man, lamented that he would be sorely missed.
He said, “Christopher (Ngobidi) was my neighbour in this market and he was nice to everybody.
“The man attempted to rescue his son who was sleeping inside the vehicle when the train crushed him, while his son was injured. The boy is unconscious at the hospital. Christopher’s wife called me this morning to ask after the husband, but I had to lie to her that he had not got to the market yet because I don’t know what to tell her.”
The Head of Public Affairs of LASEMA, Nosa Okunbor, said the agency received a distress call to the scene around 8am.
He said, “Upon arrival at the scene, it was discovered that a white bus, with number plate GGE 972 GE, veered onto the rail tracks while crossing the railway line at the PWD inward Oshodi and subsequently collided with a scheduled commuter train."
“The bus was dragged along by the train for a stretch of the journey before managing to come to a complete halt at the Oshodi under bridge.
“It was also gathered that while the train was pulling the bus, it crashed into a stationary Toyota Highlander Sport Utility Vehicle, with the number plate FST 763 FL. The driver of the SUV lost his life during the incident, while his son, who was with him in the SUV was taken to One Life private hospital, opposite the Arena, Bolade, Oshodi.”
However, the Lagos State Police Command claimed that three persons sustained injuries in the incident.
The state Police Public Relations Officer, Muyiwa Adejobi, in a statement on Monday, said the matter had been referred to the Railway Police Command for investigation.
He said, “Around 07.45am, there was an accident involving a moving train and two vehicles crossing the rail tracks at Arena Plaza, Oshodi. Three people sustained varying degrees of injury and were taken to an undisclosed hospital for treatment.”
Meanwhile, the state Governor, Babajide Sanwo-Olu, and the Minister of Transportation, Rotimi Amaechi, who visited the scene, sympathised with the families of the victims.
Sanwo-Olu said, “This incident is regrettable because it happened on the day all stakeholders reached a consensus to close down the gates into the shopping arena. And this is part of the concerns we have been raising about commuters’ safety on this axis. We need to act fast. This fatal accident should strengthen our resolve to do the needful and prevent a repeat of the sad incident in the future.
“It is also a clarion call on our people to be safety conscious whenever they need to drive across rail tracks. If there is slow movement of vehicles at any railway bypass, then there is the need to keep a safe distance from the rail tracks.”
Top Stories