Agbaje, popularly known as Esepo, revealed that he lost millions of naira due to inactivity following the ban placed on boxing and other contact sports by the Federal Government. 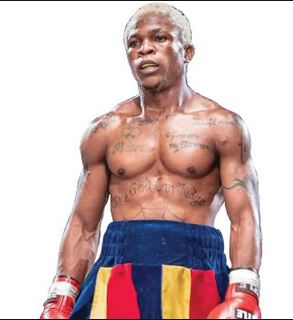 Taiwo Agbaje, a National featherweight champion, says he has resorted to collecting toll fee from drivers at the popular Ladipo market in Lagos to survive, in the wake of COVID-19, The PUNCH reports.

Agbaje, popularly known as Esepo, revealed that he lost millions of naira due to inactivity following the ban placed on boxing and other contact sports by the Federal Government.

Last month the FG lifted the ban on non-contact sports but insisted that contact sports like football, basketball, wrestling, boxing among others would remain banned until further notice.

Agbaje, winner of the Mojisola Ogunsanya Memorial Trophy for the best boxer at GOtv Boxing Night 20 last December, told our correspondent that he turned a toll collector, popularly known as agbero, at the Ladipo market in Oshodi – the biggest auto spare parts market in Lagos — to make ends meet following the harsh economic conditions due to lack of fights.

“Our government is just being unfair to us because other countries have resumed sporting activities,” Ajagbe told The PUNCH.

“I have lost money running into millions of naira because there are a lot of fights I should have attended and I was confident I would have won because I trained so hard for them.

“But look at me now, I don’t have money and can’t go into the ring. For now, I work at Ladipo market as agbero to collect money from drivers all because I want to survive.”

Other athletes also pleaded with the Federal Government to lift the ban to ease the hardships on sportspeople.

Basketball player, Victor Komonibo, said, “It’s been tough for basketball players knowing that nothing has happened for about six months now. It is really tough.

“It’s funny the FG is saying contact sports can’t return, yet we have political gatherings, people go to the markets and you have crowds in the banks.”

Handball player, Yahaya Owolabi, expressed his frustrations having to look for other means of survival.

“I see no reason, why eateries and bars were allowed to open and contact sports can’t resume. We’ve not been paid since the lockdown and surviving has been tough because I have to look for something else to do. And trust me, that is what other handball players have been going through.”

Niger Tornadoes defender, Sunday Akinmoladun, added, “I thank God for survival because Niger Tornadoes are paying our salaries but idleness is killing us.”