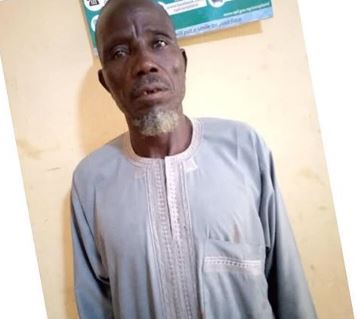 Dahiru
A 60-year-old man, Muhammed Dahiru arrested for allegedly defiling his neighbour's 5-year-old daughter has sued the girl's father.
The incident happened in Borno.
The suspect allegedly lured the victim into an uncompleted building, where he forcefully had carnal knowledge of her on Saturday, September, 19, 2020.
Thereafter threatened to slaughter her if she disclosed his identity. The girl’s dad, Auwalu Isah, disclosed they later discovered the victim sustained virginal injury and was bleeding.
After much persuasion, she revealed the identity of the rapist. Meanwhile, the suspect, in connivance with area court Nahuta, served the victim’s father a court summons for case of Defamation of character.
However, the alleged rapist was eventually arrested after Mr. Isa filed a police report. Dahiru will soon be charged to court for prosecution.
Top Stories