After complaining of pain in her abdomen, she was diagnosed with kidney stones and she was given medication for the pain and was sent home shortly after. 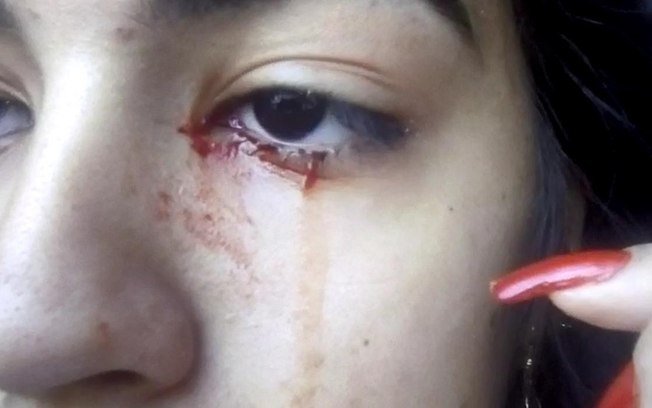 Doctors have been left baffled after a girl identified as Doris alleged cried blood from her eyes for over a week.

The 15-year-old Brazilian girl is reported to have taken ill on September 12 and her mother took her to a hospital in her home city of Sao Paolo.

After complaining of pain in her abdomen, she was diagnosed with kidney stones and she was given medication for the pain and was sent home shortly after.

She was rushed back to the emergency room on Sunday after she had blood coming out of one eye. She had no pain or discomfort and was sent home once again after doctors could not determine the cause of the blood tears.

“My daughter did countless tests, but they couldn’t find any problems. The doctors released her and we returned home at dawn on Monday,” the girl’s mother, Juliana Teixeira de Miranda, said. “We are going to do whatever the professionals ask, we want to find out what’s really going on.”

Hours after she returned from the hospital, the family became worried yet again as blood started flowing from both the teenager’s eyes.

Another return to the hospital could not still provide answers about her condition.

“She underwent a tomography and several other tests, but the doctors found nothing that could justify the blood tears. As there are no answers, the doctors asked her to do some more tests this week to try to find the cause,” Doris’ mother said.

The hospital where she has been examined has issued a statement saying that they need to conduct more tests in order to determine the cause of the unusual tears.

“The presence of blood in the tear is called hemolacria, a condition already described in medical literature. Treatment depends on the cause, but sometimes it disappears as suddenly as it appeared, without treatment and without a conclusive diagnosis”, ophthalmologist Rafael Antonio Barbosa Delsin told UOL.

“Most of the time it is a problem in the patient’s body,” doctor Leandro Fonseca added. “Although it causes a certain amazement, they are not complicated cases to treat. Depending on the cause, it can be treated with antibiotics and hormonal remedies. This situation rarely causes other health problems for the patient.”