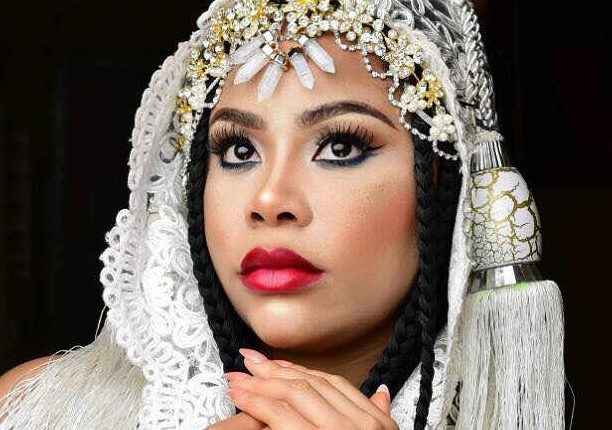 Precious Chikwendu
Controversial Nigerian journalist, Kemi Olunloyo has revealed the report of her investigation on Femi Fani-Kayode's crashed marriage.
Here are revelations Olunloyo made on Twitter:
"Prisca Nduka is the sister to Precious Fani-Kayode. She wrote the viral FB post. Her marriage to an alleged swindler crashed, her husband left her for Swaziland. FFK paid for their wedding out of love for Precious. Prisca once told their late mom "I will rather you die"
Prisca would rather have their mom die than live with Precious meaning under FFK's care and roof. They insult their uncle's, aunties and even grandparents. FFK paid for the funeral of their mom and dad. Femi basically "bankrolled" their entire family.
Precious was getting vast amounts of money monthly from her husband. She wanted an open marriage. She had two knife incidents, one at everyone and the other a friend who was visiting. She attacked and beat security guards, maids and other staff. Many quit and left.
When Precious' father died, FFK paid for all expenses including ambulance, mortuary etc. Prisca insulted the mortuary driver that he threatened to drop their father's body at a petrol station unless they APOLOGIZE. Both sisters pocketed the funeral expenses and got more.

A source told me Precious was dating 2 men b4 Femi started courting her. Ike Ogbonna a Nollywood star who she described as a "homosexual and rogue who BEAT her." She destroyed her former boss George ruining his business financially and allegedly supporting Ogbonna with.
I've never known Ik Ogbonna as a gay man and once interviewed him this year. Precious reportedly said she wasn't having good sex with him and thus started cheating with her boss George who she eventually allegedly stole his money ruining his business says my source.
Precious Fani-Kayode has a sad sad past before FFK marriage. She told her friends that her dad pimped her to her uncle at the age of 16/17yo in Onitsha as a sex slave and it affected her psychologically. Her friends attribute that to her psychological problem with FFK
Precious was once raped by a man in Lagos in another uncle's house. She lived thru years of sexual abuse but friends say Fani-Kayode protected her doing so much for her to improve her life. Due to her mom's health, she raised her own siblings with money from
prostitution 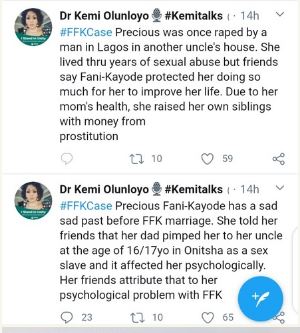 Precious shared a lot with friends, family and staff who are all sharing this info to me now to set the record straight. Femi was reportedly covering up Precious' mental status. Prisca her sister has provoked a lot of people by her allegations of abuse by Femi
Friends say Precious was seeing a psychiatrist before meeting Femi. They also told me that she was "sleeping" with another man while FFK was in EFCC detention. The extramarital man said he did not know she was married.
Watch video below:
Top Stories