As those who lost valuables to the inferno counted their losses, the injured were rushed to the Pacific Hospital and Ancilla (Catholic) Hospital, both in the area for treatment. 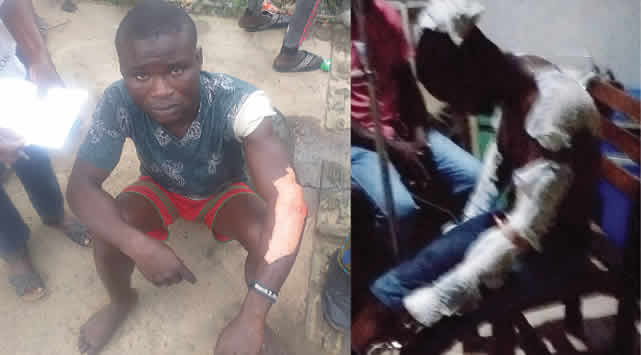 Gift and Manager of the event centre

Injured persons in Thursday’s gas explosion that rocked Cele area of Elliot along Ajuwon Road in the Ifako-Ijaiye Local Government Area of the state have recounted their near-death experiences to City Round.

The incident was caused by a 30 tonnes LPG tanker which gutted fire and affected 11 cars, a tricycle, buildings, a plant market and an event centre. About 15 persons also reportedly sustained varying degrees of injury.

The Acting Coordinator of the Lagos Territorial Office, National Emergency Management Agency, Ibrahim Farinloye, told one of our correspondents at the site of the accident that the gas tanker was leaving the Manna Gas Refilling Plant for quantity re-weighing when it exploded and affected domestic gas cylinders in the gas plant.

As those who lost valuables to the inferno counted their losses, the injured were rushed to the Pacific Hospital and Ancilla (Catholic) Hospital, both in the area for treatment.

One of the survivors and resident in the area who gave his name only as Gift, who sustained burns in his left arm, said he was happy to be alive.

He said, “I was in my house when I saw the blazing of the fire. My house is upstairs and I tried to run. I quickly pushed away my wife and kids. But as I made to follow them, the fire caught me. I cannot say how I escaped.’’

Gift stated that the gas truck had been there in the area three days before the incident, adding, “I heard the driver arguing with the workers about the quantity to be delivered. I didn’t know that an incident that would affect me loomed.’’

Taiwo, a mechanic opposite the gas plant, who lost 10 vehicles belonging to his customers, said he was working on a Nissan car with his partner when the explosion occurred.

He said dejectedly, “Ten vehicles were destroyed. I don’t know what we are going to tell the customers. We saw death but cannot exactly say how we escaped. It was miraculous. We could have been burnt to death. The vehicles were all burnt as you can see.’’

Some of the residents told City Round that the gas truck driver, who suffered serious burns, had a disagreement with the gas plant attendants over the gas quantity and was driving out of the plant for reweighing when the truck’s discharging valve ruptured and ignited fire. They further said the driver who drove the truck when the explosion occurred was not the one who brought it to the gas plant.

The manager of the affected S&Y event centre also suffered injuries in the incident. When City Round visited the Pacific Hospital where the manager and some others injured persons were taken to, he wore bandages like armour and receiving intravenous fluid. Intermittently, he held his head for pity but was continually consoled by family members in the ward.

Another victim who refused to give his name told one of our correspondents that he was driving out of the event centre when the explosion engulfed his car.

Meanwhile, a businessman, Samson Ajala, who sold sewing machines in Lokoja metropolis, was among those killed during the explosion that rocked Kogi State on Wednesday.

John Mbonu, a radio technician, is a friend to the late Ajala. He told City Round that the deceased was his good friend, nothing that they all called him, “Mr Jovial.’’ He described the late Ajala as a gentle and upright man whose death he noted left a vacuum hard to fill.

The deceased was said to be taking his children to school and wife to her shop when they all died in the accident.

On that day, an NNPC petrol tanker loaded with 33,000 litres of petrol due to brake failure fell on its side crushing five vehicles, three tricycles, two motorcycles and killing the occupants in an inferno at the ever-busy Felele, along Lokoja-Abuja highway.

Felele is also where the state-owned polytechnic is and the spot has recorded several deaths in the past.

Both sides of the road are residential. The crash which occurred a few minutes after 8am occurred near the polytechnic and caught motorists and passersby unawares. The disaster also affected the students who resumed on Monday after the easing of the COVID-19 restrictions.

A survivor, Mallam Musa Eneye, is a Deputy Registrar at the polytechnic. He was on his way to work in his Mercedes Benz car with one of his daughters and two others when his car was suddenly hit from behind. The impact pushed his car off the road before the tanker landed on its side on top of five vehicles trying to overtake it.

Eneye said, “We were five in the car on that day including one on my daughters and some workers in the school. Immediately I entered the main road, I didn’t see any petrol tanker coming behind.”

He added that when he slowed down to take a bend to her daughter’s school, he noticed that his car had been hit behind by a petrol tanker.

Eneye further said that the impact pushed his car out of the road which forced him to veer off a culvert till he moved out of danger.

A cleric, Idris Yusuf and his cousin, Abdullahi Salihu, living in the Felele community lost six children to the accident.

When our correspondent tried to speak with the fathers, they merely expressed shock over the incident. Yusuf said, “We are still in shock to talk about it.’’

Meanwhile, the state government has declared a two day period of mourning in honour of those killed in the explosion.

The government’s position was contained in a statement on Thursday by the state Commissioner for Information and Communication, Kingsley Fanwo.