A man identified as Frank Anago said he sustained minor injuries as he tried to escape from the area. 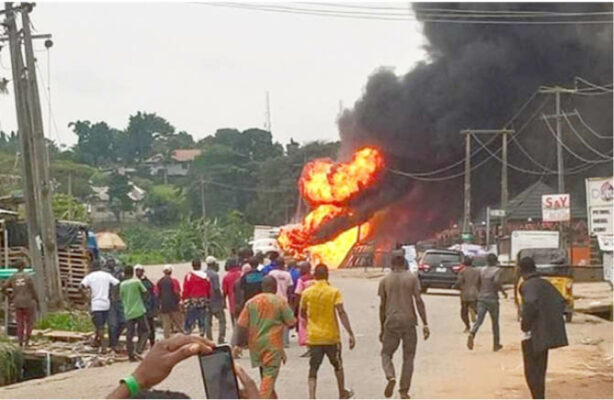 Scene of the Lagos gas explosion

A truck said to be carrying gasoline which crashed at Cele Bus Stop, Iju Waterworks area of Lagos on Thursday, according to rescuers, left about 15 persons with varying degrees of  burns.

The Territorial Coordinator of the National Emergency Management Agency (NEMA), Ibrahim Farinloye, said 16 vehicles were burnt beyond recognition while an event centre, a sawmill, two tricycles, two gas tankers and a church building were not spared by the fire.

A man identified as Frank Anago said he sustained minor injuries as he tried to escape from the area.

Frank, a refrigerator repairer who owns a shop in one of the houses that were razed, said he thought the world had come to an end as thick dark smoke followed the explosion.

He said he heard a loud sound which was followed by fire while he was trying to work on a freezer.

“I saw a thick dark smoke. The entire area became dark with smoke.

“I rushed out of my shop and escaped through the back entrance when I saw what was once our building consumed by fire,” he said.

He further said he quickly rushed to one of the chemists where he was treated.

He said over 50 persons may have sustained injuries as a result of the explosion.

According to him, people were confused when they heard the explosion as they ran in different directions.

“Those who were in their houses quickly moved their children out of fear of being trapped,” he said.

When our correspondent visited the scene of the incident on Friday, residents identified majority of those injured as traders, including the owner of one of the gas shops, Kanmi Adeyanju, his apprentice, Taju, and a customer identified as Kareem.

The owner of a cement shop identified as Alhaji, according to witnesses, also sustained injuries.

It was learnt that Alhaji had just resumed work for the day when the explosion went off.

Rabiu, a tricycle operator, said he heard that two persons died, but could not give their identities.

“I heard that two out of those who were rushed to hospital at Iju but were rejected by the hospital management died yesterday night.

“I learnt that they were rushed to two hospitals by members of the public who arrived the scene first,” he said.

Another resident, Philo Ogwu, described the explosion as “Armageddon,” saying it shook the entire buildings in the area.

“I was doing some work on my laptop when I heard a loud bang.

“The entire building was shaking.

“I thought it was a bomb explosion.

“When I looked through the window, I saw people running out of their homes and smoke covered everywhere.

“I had to run out of the house thinking that it was in my compound.

“It was later that I learnt the explosion happened far away from my compound, but the impact was too much.

“It affected many streets, such as Obawole Estate, Lucas, Kay Farm, Balogun, etc.

“I think landlords need to do something about their buildings because the explosion affected many foundations and fences.

“The impact of the explosion lifted one of the vehicles.

“It eventually landed upside down in a drainage close by.

“Another truck landed on about three vehicles parked on the street, including the one belonging to the cement seller,” she added.

She said it was when the explosion subsided  people rushed to the area only to discover that it was a truck carrying gas that exploded.

Official reports from NEMA said about 15 persons were injured while 16 vehicles got burnt beyond recognition in the incident.

It was learnt that on arrival at the clinic in Iju, two of them were transferred to a government general hospital where doctors are battling to save their lives, while three were in critical condition as at yesterday.

One of the rescuers said those in critical condition suffered third degree burns.

He said: “One block factory and an attached office, one cement store, a saw mill and several stores where building materials are sold were also affected.”

The Head, Public Affairs at LASEMA, Nosa Okunbor, said when officials of the agency arrived at the scene they observed that it was a gas explosion.

He said investigation revealed that an unknown truck conveying gasoline had a lone accident and exploded.

He said the impact of the explosion led to fire at adjoining buildings and  several vehicles were burnt.

“Several persons were injured and have been taken to the nearest hospital for treatment.