An experimental treatment that forces cancer cells to self-destruct without drugs has been developed by scientists. 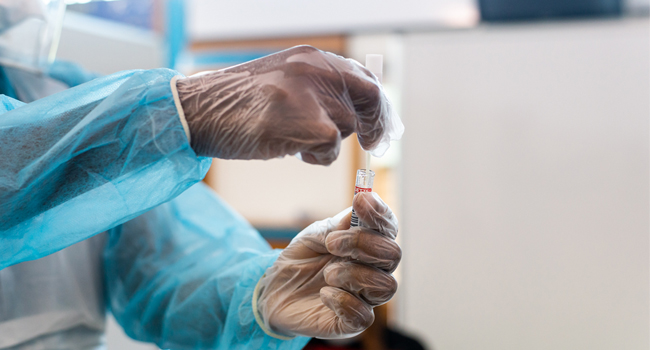 File photo
Scientists can now treat cancer without using drugs.
This became possible after a research team in Singapore devised an experimental treatment approach that causes cancer cells to self-destruct without the use of drugs, according to a paper published in the scientific, peer-reviewed journal ‘Small’.
The treatment, which is still only in the experimental stage and has not been approved for human use in any known territory, has been tested on mice where it killed about 80 per cent of breast, skin, and gastric cancer cells, which is comparable to conventional chemotherapeutic drugs like Cisplatin.
The treatment makes use of a ‘trojan-horse’ nanoparticle coated with a specific amino-acid – L-phenylalanine – that cancer cells rely on to replicate.
The nanoparticle, which is approximately 30,000 times smaller than a strand of human hair has been codenamed Nano-pPAAM by the research team domiciled at the Nanyang Technological University in Singapore.
Once it finds its way into the cancer cells, Nano-pPAAM stimulates excessive reactive oxygen species (ROS) production – a type of reactive molecule in the body – causing cancer cells to self-destruct while remaining harmless to the healthy cells, a press statement from the Singapore University, announcing the results of the study, said.
By removing the use of pharmaceuticals, the treatment solves the common issue of drug-resistant cancer cells and has the potential to revolutionise the effectiveness of cancer treatment, experts say.
“Against conventional wisdom, our approach involved using the nanomaterial as a drug instead of as a drug-carrier,” lead author of the study, Dalton Tay, said.
“Here, the cancer-selective and killing properties of Nano-pPAAM are intrinsic and do not need to be ‘activated’ by any external stimuli. The amino acid L-phenylalanine acts as a ‘trojan horse’ – a cloak to mask the nanotherapeutic on the inside.”
“By removing the drug component, we have effectively simplified the nanomedicine formulation and may overcome the numerous technological hurdles that are hindering the bench-to-bedside translation of drug-based nanomedicine.”
The scientists are now working to “further refine the design and chemistry of the Nano-pPAAM to make it more precise in targeting specific cancer types and achieve higher therapeutic efficacy,” the University statement said.
Top Stories