A white woman has shared the sad story how her Nigerian lover killed their son just to spite her. 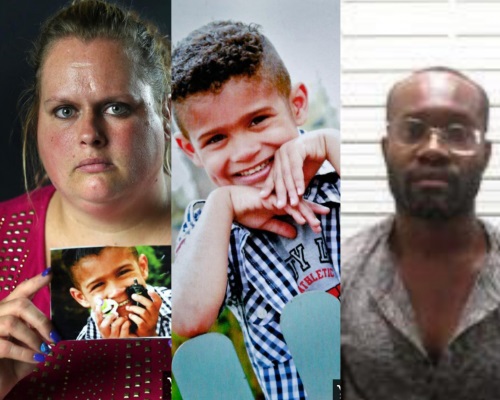 Hayley Kelly claimed that her Nigerian lover killed their son just to spite her.
An American woman has shared the sad and touching story how her Nigerian lover killed their son in a bid to spite her.
The woman identified as Hayley Kelly from Wabash Indianapolis claimed that she met the man identified as Miguel Nchama on a dating app in 2008 while looking for love.
He was a “a sweet guy,” she said.
According to Nigeriabroad.com, the two fell in love, dated for two years and had a pretty little boy they named Nakota.
A romance protected by lies, it later came to a ghastly end, but its malice stalked Kelly for 12 years, finally drawing blood in 2020.
Unravelling began for the romance in 2011 when the police came for Nchama: a certain Judson Mbanuzue, a Nigerian in the United States had filed a report alleging Nchama stole his ID, obtained a social security number with it, and piled up loans in his name—Mbanuzue’s family had haboured the accused in 2002.
He pleaded guilty to charges of identity theft and social security fraud and was jailed for 34 months.
But investigations into the case uncovered more disturbing secrets: the name “Miguel Nchama” was actually one of five fake names used by the culprit whose real name was Ejike Ibe.
Going forward, however, he identified as Anthony Dibiah.
“I felt betrayed,” his lover Kelly told an American news outlet days ago. “I didn’t trust him anymore.”
Kelly, nonetheless, said she still loved him.
From jail, he became “controlling” and “was making demands on what I do and when I do it,” Kelly noted.
She got tired of the overreach and ended the relationship as he was just getting out of jail.
Upon his release, Dibiah became a subject of an immigration stalemate.
America’s Immigration and Customs Enforcement sought to deport him but Nigeria technically rejected him: its embassy refused to provide ICE with deportation documentation, rendering Dibiah “stateless.”
Though his jail term ended in 2014, he spent more time in prison as the United States didn’t know what to do with him. They finally let him roam.
Dibiah obtained a court order for visitation rights to be able to see his son Nakota as it appeared Kelly had made efforts to keep the ex-convict at bay.
Nakota, then 7, visited his father on weekends and reportedly said he was “afraid” of going over.
His father “hit him” and was always “yelling at him,” said Kelly, who filed up to five complaints in five years with the Department of Child Services.
On the other hand, Dibiah told DCS that Kelly wanted more child support, wanted to cut him off and was in fact the problem.
DCS said it found no evidence in both parents’ claims, so the complaints were ignored.
The custodial battle endured for years.
During one weekend visit to his father, Nakota, 10 at the time of his presumed death July 18, reportedly called his mother saying: “Oh I’m dead. Don’t expect me to come back. My dad’s going to kill me.”
He had offended the father and aware that Dibiah “never let any slight slide,” feared for the worst and made the call.
Kelly said Nakota never liked visiting the father but for the court mandating that.
The last visitation was problematic: Kelly had arrived late at the couple’s meeting point, having earlier taken the boy to a football field where he had regular practice.
Dibiah was offended and allegedly threatened not to cooperate with her again.
When Nakota got to his father’s house, he called his mother and expressed love, saying he couldn’t wait to see her, Kelly narrated.
Two hours after that call, Dibiah called an unnamed relative: “I just killed my son,” he told the relative three times before the receiver ended the call and called the police.
The police arrived Dibiah’s house, saw his car outside, noticed movement inside the house, but “didn’t have enough reason” to break in.
Dibiah also called a friend and confessed the same thing.
The friend called the police, who arrived a second time and gained access.
But Dibiah was already gone.
Investigators say they found blood stains, hair, and brain matter in the house.
Security camera also captured him making several trips to the trash, but nothing was found there.
As all these were unfolding, Kelly got a text message from Dibiah: “Sometimes I hear voices. My son is in heaven.”
She was frightened, especially as she could not reach Nakota on phone, and reported the text to law enforcement.
She was unaware of the development with the police at Dibiah’s house and was looking to have Nakota back the next day.
Manhunt began and hours later, police found Dibiah in his car, which also bore blood stains.
But Nakota was missing. The culprit is being held without bail in a Florida county jail on murder charges.
Crime journalist Vic Ryckaert, who tried to speak to him, said he declined comment, but that his lawyer had sworn to put up “a vigorous defence.”
But some accounts say Dibiah, 37, confessed to suffocating Nakota with a bag.
Police have no clue regarding Nakota’s body.
For Kelly, broken by love and mourning a son whose remains are still missing, Dibiah did it all to spite her over custodial squabbles.
“He dumped his body somewhere and won’t let me know. I feel like it’s another way of hurting me.”
Top Stories