In a commando fashion, the residents claimed that the armed policemen with teargas and other weapons arrived the community by 3.00am on Saturday, August 15. 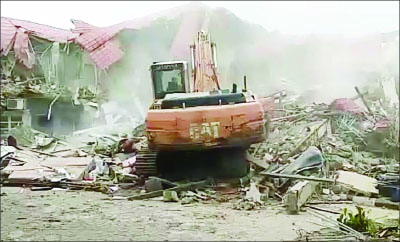 Inhabitants of Apo Akpmajenya indigenous community, in the Federal Capital Territory (FCT), Abuja, are still counting their losses. This is even days after armed policemen swooped on them at the unholy hours of the night, teargasing them before evicting them and demolishing their houses.

In a commando fashion, the residents claimed that the armed policemen with teargas and other weapons arrived the community by 3.00am on Saturday, August 15, brutalised them and reduced their over 134 houses to debris.

The Federal Capital Territory Administration (FCTA) had on that fateful day rolled out bulldozers and demolished the houses at Apo Akpmajenya community, in an operation aimed at the planned construction of Outer Southern Expressway (OSEX), claiming that adequate compensation and accommodation were provided for many of the displaced residents.

Deputy Director, Planning and Resettlement, Department of Resettlement and Compensation, Nasir Suleiman, maintained that owners of 131 houses and 169 plots were given compensation before the commencement of the exercise. Wailing, some of the displaced residents still sleeping in the open with mats swore to fight the injustice with the last drain of their blood.

They claimed that only the indigenes of the village were compensated. They argued that a large number of the displaced persons were non-indigenous owning houses and have been living there for many years.

The affected residents described the action of the authorities as unfair, insensitive, wicked and brutish. One of the victims, Timothy Emmanuel, told Daily Sun: “I have been staying in this community for more than 17 years. I was born here and my parents live here. Talking about prior notice, the only one we received was the arrangement for spare parts shops to be relocated to Apo resettlement.

“We complied with that notice, removed all the containers and sign boards from the road, and made sure nobody was selling or sampling anything outside. After we complied with that, nobody came to say that we have done well. Nobody even came again to give any notice.

“They didn’t even tell us to leave in the first place. They only spoke about people selling spare parts on the road. They just came around 3.00am on a Saturday, which is not an official working day. They came with armed men surrounding everywhere, shooting into the air to clear the people.

“One of my neighbours was inside his house sleeping, didn’t even know what was happening, they shot teargas into his house. It was just God that helped them, if not they would have died. They could not see let alone evacuate their belonging. We don’t know if the indigenes were compensated because we have not heard from them since.

“However, for us the occupants, as you can see, there was nothing like compensation. I came to this village in 2003, that was 17 years, but I didn’t get anything. My families are scattered with different relatives, my property gone, I am even thankful that I was able to carry all my things.”

Another resident, Friday Boaz, said: “I have been staying here for more than six years and I didn’t know about any notice. I just woke up by 3.00am on Saturday to gunshots and teargas from police ordering us to pack our belongings and evacuate. They didn’t give me any place to stay.

“They may have compensated the indigenes but people like me weren’t given anything. I had to beg for one uncompleted building in Gudu to squat, I don’t have any place to stay. People are saying they want to speak for us but the way I see it, nothing will come out of it. This type of thing has been happening for years.”

Christina Fakorede who witnessed the incident, narrated: “I don’t stay in the village, I stay in this estate opposite. In the early hours of Saturday, from my estate we were hearing screams, so we went to check. There were so many armed men chasing people away. That surely didn’t look like the way they evict people that they have given compensation.

“I believe they should have at least given them three days to pack their belongings. You don’t just swoop on people in the middle of the night with teargas. Some of them could not take out their belongings. Chairs, beds, furnishings were destroyed along with the buildings. You can still see some of them broken. I don’t even know if it was gunshots or only teargas.

An old woman, who declined to reveal her identity, said: “I am even tired of crying. My grown up children currently stay with their friends in Apo resettlement. The younger ones are scattered in different places.

“We are hearing that the indigenes were compensated but what about us who have stayed her for over 20 years? What will be our fate? Some people are staying in uncompleted buildings.

“Others are squeezing themselves into whatever shelter they can find. I don’t believe those people will actually do anything about this. They are very wicked people who don’t care about the poor. That is the Nigeria we live in.”

An angry young man said: “I don’t even remember the time they came. They started telling everyone to park out, everyone was panicking, at first I thought they were just joking. The indigenes here assured us that nothing would happen that we shouldn’t panic. Some of us got relaxed, because the indigenes chased the first policemen away. So they came back with so many more policemen, throwing teargas everywhere and people started running chaotically.

“About alternative accommodation, we didn’t get anything. We believe that the indigenes were aware about this but did not tell us. I honestly think they were settled. I have parked my belongings to my friend’s house. My mom and my sisters parked their belongings to our in-law’s place. There are others who are just staying in the open without anywhere to go.”