The tension erupted after the family mounted a banner at the popular Abba Junction to announce his burial activities. 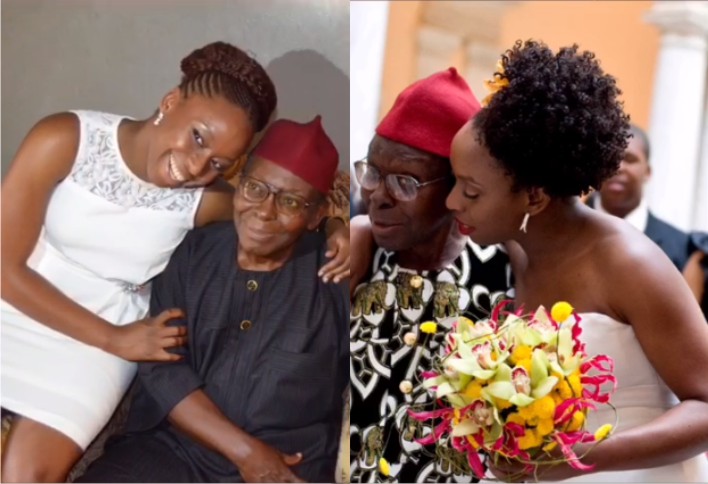 Chimamanda and her father

A move by the family members of Professor James Adichie, Chimamanda Adichie’s late father, to announce his burial has caused some tension.

The tension erupted after the family mounted a banner at the popular Abba Junction to announce his burial activities. This almost led to renewed hostility between Abba and Ukpo communities in Anambra State, according to Vanguard.

Professor Adichie’s burial is Friday, October 9, in his home town, Abba.  He died at the age of 88 in June.

Adichie’s community had been involved in a protracted land dispute with its neighbouring Ukpo, which had led to loss of lives and destruction of properties.

Recently, the people of Ukpo removed the gigantic banner with the inscription ‘Welcome to Abba’ mounted at the junction.

It was gathered that as Abba people tried to mount the flex on Professor Adichie at a junction along the Enugu-Onitsha Expressway, leading to the two communities on Thursday, to direct those coming for the burial, some policemen in the area refused them.

But for the intervention of other policemen from the Adichie family who pleaded with their colleagues at the junction, the situation would have led to a major fracas.

An indigene of Abba said the people of the community allowed the policemen to get away with it because of the love they have for their brother, Adichie, who was the first Nigerian Professor of Statistics and retired at the University of Nigeria, Nsukka, some years ago.

“It took the timely arrival of few policemen attached to Adichie’s family and pleas from Adichie’s brothers to save the situation from degenerating, as concerned youths from Abba had insisted that the banner must be erected at the junction, along Enugu-Onitsha Expressway,” he said.

Anambra State Police Public Relations Officer, PPRO, Mr. Mohammed Haruna, however, said he was not aware of the development.