Gallant men of the Nigerian army have successfully captured a notorious bandit leader. 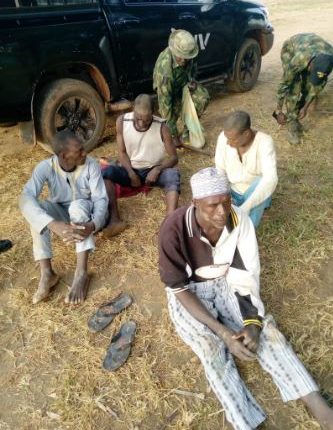 The arrested bandits
A notorious suspected armed bandit leader, Mujitafa Shehu has been arrested and three others killed by the army.
Also, the men of the Nigerian Army Operation Sahel Sanity rescued 26 kidnapped victims in Zamfara and Katsina States.
In a statement issued today by the acting director, Defence Media Operations, Brigadier-General Bernard Onyeuko in Gusau, Zamfara State said the troops has stepped up operation into the remote and hitherto in-accessible areas.
According to him, between October 4 and 9, 2020, combined troops of Operation Sahel Sanity of 17 Brigade and Sector 9 Operation Hadarin Daji conducted a combined aggressive clearance operation and identified bandits’ enclaves at Dankar, Kandawa, Yau yau, Hayin Yau yau, Bugaje, Zandam, Kwari Mai Zurfi, Yar Gamji, Bukuru and Jibiyawa in Batsari and Jibiya LGAs of Katsina State leading to the neutralization of three bandits.
“Many others escaped with varying degrees of gunshot wounds. In the aftermath of the encounter, the gallant troops captured one AK 47 magazine loaded with 25 rounds of 7.62mm Special ammunition and one dane gun belonging to the fleeing bandits.”
He disclosed that bandits’ motorcycle and eight bandits hideouts were destroyed.
He further explained that following a covert operation based on credible intelligence, four suspected bandits were arrested at Kankara and Tudu village of Kankara Local Government Area of Katsina State including a suspected bandits leader named Mujitafa Shehu.
“On 5 October 2020, troops deployed at Forward Operation Base Bena in Wasagu-Danko of Kebbi state, in conjunction with troops of 223 Battalion deployed at Wasagu and Unashi rescued 2 kidnapped victims during a clearance operation, rescued victims have since been reunited with their families.
Brigadier-General Onyeuko said following a tip-off, troops of Forward Operation Base Jengebe arrested a suspected drug peddler, one Mubarak Shehu at Jengebe Check Point in Wanki District of Gusau.
“Suspect was caught with 20 packets of Pentazocine injection concealed in his motorcycle while on transit to deliver the item at Kungurmi village of Bungudu, Preliminary investigation revealed that the drug baron is a member of the cartel that supplies hard drugs to bandits in the forest.”
Relatedly, on October 6, 2020, troops deployed at Yar Santa in Kankara of Katsina State rescued a female Kidnapped victim in Kankara and has been reunited with her family.
“Troops raided and destroyed bandits’ camps during a clearance operation at Garin Inu, Shekewa Forest, Jajaye, Kerewa, Solar, Mallamawa and Gobirawa in Katsina State, recovered 2 Dane guns and assorted items.
“On 9th October 2020, troops deployed at Forward Operation Base Magami while responding to a distress call rescued 23 kidnapped victims from fleeing bandits who abandoned the captives as the unrelenting troops were closing in their hideout along Zauni-Jengebe road in Gusau Zamfara State.
“Preliminary investigation revealed that the victims were kidnapped while on transit to Magami Market from Gusau in a passenger bus.”
The troops were urged not to rest on their oars until banditry and other sundry crimes are totally eliminated in the North-West.
Top Stories