At least two persons have reportedly been shot dead by police in Surulere during #EndSARS protest. 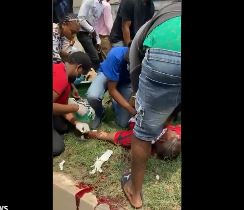 A victim killed during the protest
Police bullets have reportedly ended the lives of two protesters on Monday during a protest in Surulere area of Lagos state.
This comes after roads in Lekki, Surulere and Allen Avenue in Lagos were shut down as protests calling for the reform of the police and the dissolution of SARS continued.
Twitter users cried out on the platform after police reportedly started shooting at peaceful protesters in Surulere.
The #EndSARS protest — which trended as number one globally on Twitter — was triggered by incessant cases of brutality.
Before now, there has been a series of protests across the country demanding the end of the police unit which is notorious for human rights violations.
Owing to the mass outrage, the IGP had banned operatives of SARS, the Special Tactical Squad (STS) and Intelligence Response Team (IRT) from undertaking routine patrols as well as stop and search duties.
But Nigerians were not pacified by this owing to similar promises of reforming the unit in the past which failed.
On Sunday, Mohammed Adamu, inspector-general of police (IGP), announced the disbandment of the police unit.
He said the operatives will be redeployed, and that a new policing arrangement will be set up to fill in the gaps.

The IG of police needs to resign. He needs to be sacked! Yet the president is currently making a comment on the matter that obviously holds no water. @jidesanwoolu can you see??? Can you see???? https://t.co/N2uw8Lqsdz

They just killed my brother in Surulere💔💔💔💔#Surulere #EndSarsNow

They are shooting at us at panti police station! A person has been shot!!!!!!!

The police shootings in Lagos this afternoon (at least one person reported dead) are tragic and condemnable. There is no excuse for shooting anything (not to talk of live bullets) at peaceful protesters. The Police MUST find the shooters and make them face justice in full.

At this point, the Inspector-General of Police must resign. He has completely lost control of the situation#IGPResignNow

I’m safe, my friend is injured, she fell while running away from the gunshots

"@Omoissydeyhere: The police just shot someone at Barracks, Surulere. The guy is bleeding, medical help is needed!!!