Nigerian actress who said she has bipolar has come under serious social media backlash. 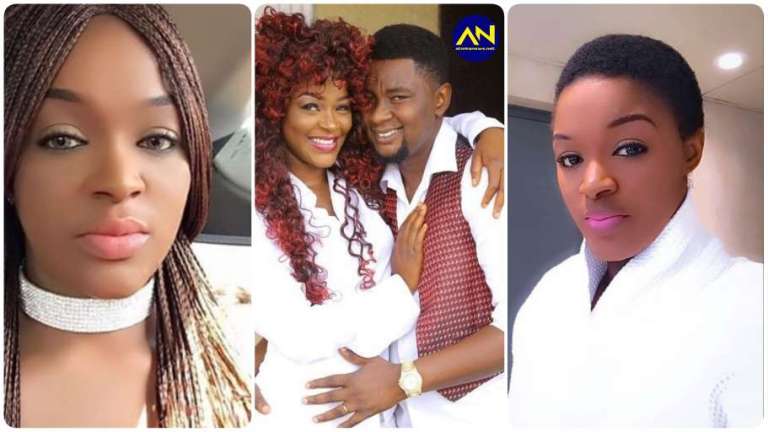 Chacha Eke and husband, Austin
Nollywood actress, Chacha Eke has come under serious attack from Nigerians after being accused of trying to force herself into marriage with husband, Austin.
Recall that she started all the drama after releasing a video saying that her marriage is over, only for her to make a u-turn a week later to debunk claims that her marriage has crashed.
In a new video, Chacha, who was seen heavily pregnant insisted that she is bipolar and she never intends to pack out of her marriage of seven years.
However, some Nigerians are not convinced by her latest antics as they believe she is forcing herself into marriage that is not working as her husband is allegedly treating her bad.
See some reactions below:
Clee685 wrote: “Madam stop forcing your self inside this Marriage if you want block me or restrict me because I must tell you life is too short and if is not working you quite,Marriage is not endurance you are forcing your self to move with a Marriage that is not working out…..we all have seen it all nothing to hide again your husband Austin has to change his treating you bad don’t go and die oo because of “I am trying to save my Marriage ” just an advice….I wish you good luck and many more years in your Marriage.”
Official Emma wrote: “Carry your top up I’m not sure you are pregnant jor”
Jennyluvpretty wrote: “Pls what is the connection between ending your marriage and having a bipolar disorder??? I mean your husband should be with you at this time so I don’t understand why you’re saying your marriage is ended in that video.i honestly think there’s more to this but I wish you and yours well”
Posh Amiso wrote: “You’re just a distraction.. you keep defending your Mike Tyson husband. Na your family I de pity. Infact make I unfriend to sef. I tire for you exclusive drama”
Belovesucre wrote: “D first day was ur tired of d marriage, d other day was bipolar, today is pregnant, Pls keep lying in us we are ur mattress”
Top Stories