Nigeria's Super Eagles couldn't muster a win against Tunisia in an international friendly in Austria. 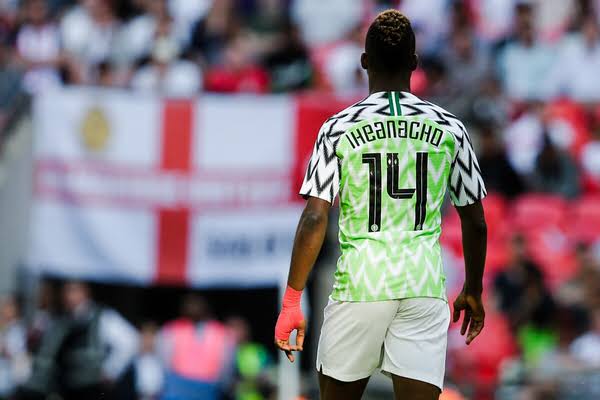 Kelechi Iheanacho
Nigerian star, Kelechi Iheanacho scored as the Super Eagles drew with Tunisia in a friendly at the Austrian city of St. Veit an der Glan on Tuesday.
This means that the Super Eagles has drawn one and lost one of their two friendlies in Austria, after the 1-0 loss to Algeria in Klagenfurt on Friday.
Striker Iheanacho received the ball inside the box with his back to goal in the 21st minute, but the Leicester City man turned, despite close attention from the Tunisian defence, to fire into the top right corner, for the opening goal of the game.
The Super Eagles should have gone ahead 2-0 in the 28th minute after captain Ahmed Musa was brought down inside the box by Tunisia goalkeeper Ben Mustapha.
But the shotstopper redeemed himself, saving the resultant penalty kick from Iheanacho.
The Nigerians would rue the penalty miss after right-back Mohamed Drager slotted in a pass inside the box, fending off Moses Simon, for his first international goal, just before the break.
Iheanacho’s header from Simon’s corner went inches wide two minutes after the break, as the Eagles sought for the lead.
Both sides shared possession but failed to find the winner at the 3,000 capacity stadium.
It was an improved performance from the Eagles, following the lethargic display against Algeria, with regulars Iheanacho, Musa, Simon and Kenneth Omeruo returning to the starting line up.
Sparta Rotterdam keeper Maduka Okoye also retained his spot after his impressive outing against the Algerians, while Kevin Akpoguma made his first start.
Genk striker Cyriel Dessers and CSKA forward Chidera Ejuke made their debuts, coming on as substitutes with less than 20 minutes to play.
In the end, Okoye ensured the tie ended in a stalemate with an impressive one-hand save, tipping off Drager’s chip on the edge of the box over the post, with seconds left.
Top Stories