Yesufu advised the protesters not to be distracted by the leadership tussle but to put their eyes on the ball. 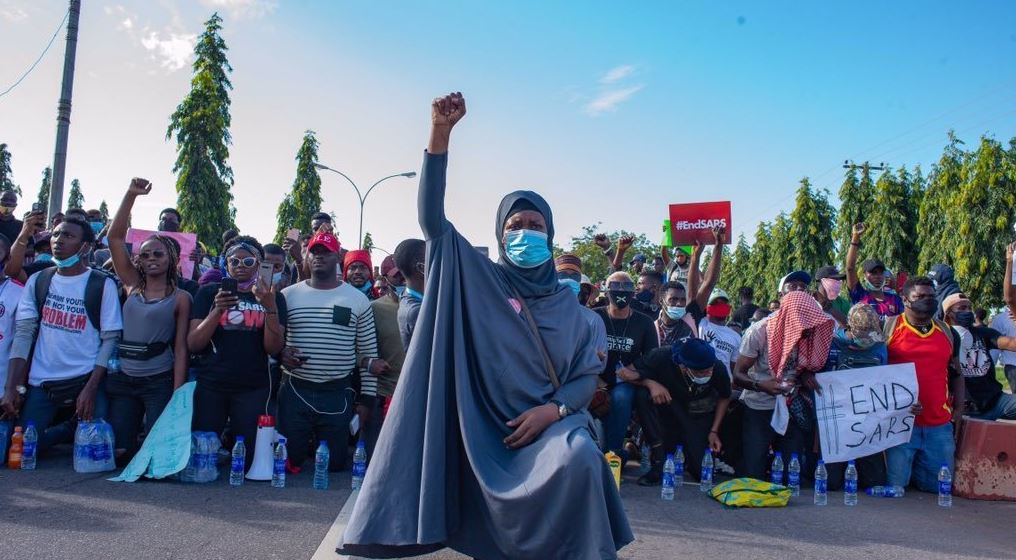 Aisha Yesufu, a human rights activists and one of the strongest voices spearheading the #EndSARS protests has encouraged protesters around the country to continue in the fight against police brutality while demanding for a total reformation of the Nigeria Police Force.

She made the call in a video uploaded on her Twitter handle, @AishaYesufu, on Wednesday morning.

Yesufu was reacting to the leadership tussle rocking some of the voices of the #EndSARS campaign.

Demonstrations organised on social media had erupted into nationwide protests on the streets earlier this month with the protesters calling for the abolition of the Special Anti-Robbery Squad accused of unlawful arrests, torture, and extra-judicial killings.

The Federal Government gave in to the protesters’ demand on Sunday, announcing that the special police unit has been disbanded.

On Tuesday, the Inspector-General of Police, Mohammed Adamu, ordered all defunct SARS operatives to undergo psychological and medical examinations. He also set up the Special Weapons and Tactics Team that will replace the disbanded SARS.

But many have greeted the announcements with scepticism after previous promises to improve SARS and the NPF went unfulfilled.

State governors and the Central Bank Governor, Godwin Emefiele, amongst others, had subsequently engaged some of the leading voices of the protests to suspend their demonstrations and give the government time to implement the announced measures.

The development led to an outcry by some factions of the #EndSARS campaign who were not at the meetings.

But speaking on Wednesday, Yesufu advised the protesters not to be distracted by the leadership tussle but to “eye on the ball.”

“Please don’t get distracted over this issue of who is this, who is not what; eye on the ball —forget the distraction. There is nothing yet for you to go into fighting mode over. Focus on your message and the results that you want. That’s what is most important.

“Yes, we have seen the headlines from the government but have you seen the execution plan?

“Can the government bring an execution plan where we know A, B, C, D, this is what it will do from this time to this time, what will happen with time frame? That is what is most important.”

Continuing, she added, “A lot of people who are not being part of this protest as you will expect are trying to discredit it by talking about the protest being monetised. If anybody collects money for the protest, drag the person out, let those who didn’t collect money do their thing.

“If yours is monetised, another person isn’t monetised. I wonder why we want to drag things down. This is part of the things that had hurt the older generation and that is why we’ve remained divided and we have not had the country that works for all of us.

“Please don’t get distracted, focus on the issue. You are doing so great. You have woken up, you’ve found your voices and you have even given us also voices. #EndSARS now, #SARSMustEnd and we must have a great nation. Nothing else matters.”