#EndSARS: Meet The Man Whose Leg Got Amputated After He Was Shot By Police Officer 2 Months After His Wedding


According to him, he lost his leg after he was allegedly shot at by a police officer. 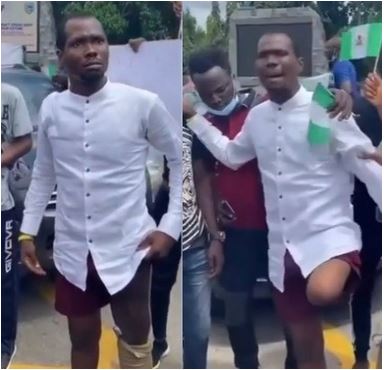 A Nigerian man who has been identified simply as Kingsley has shared the sad story of how he lost his leg.

The man told his story even as Nigerians continue to demand for an end to police brutality and total reform of the Nigerian Police Force. According to him, he lost his leg after he was allegedly shot at by a police officer.

While speaking with EndSARS protesters, Kingsley alleged he was shot at by a police officer two months after his wedding. The gunshot wound resulted in his left leg being amputated. He did not give a date or place where this incident happened.

Watch the emotional video of him recounting his story below