Nigerian youths protesting against police brutality have paid with their lives after soldiers opened fire on them. 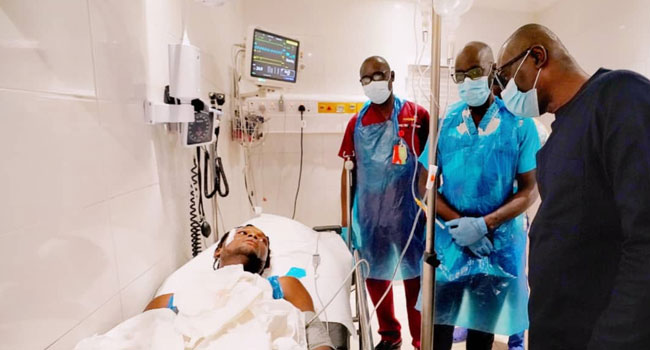 Governor Babajide Sanwo-Olu visits a victim shot by security operatives
Eyewitnesses have narrated how security operatives opened fire at #EndSARS protesters in the Lekki area of Lagos State.
The tragic incident left many people dead, with others sustaining different degrees of injuries.
It was gathered that security operatives had stormed the scene of the protest on Tuesday night hours after the Lagos Government announced a 24-hour curfew and opened fire.
Some protesters told Channels TV that they shot directly at them with an intent to kill them.
Many others turned to social media to share their experiences. In various tweets and Instagram posts shared, many containing video clips capturing sounds of gunshots and people with gunshot wounds and more, the protesters expressed outrage at what transpired at the venue.
In the process, eyewitnesses said the security operatives fired live bullets at protesters there.
This, they said, resulted in the death of several persons with many others injured.
The witnesses said some government officials had come in the evening to unmount the CCTV cameras stationed at the toll gate.
They added that while the security operatives were carrying out the shooting, the light at the scene was put out.
In some of the videos shared on social media, people cluster together as they struggle to save some of those who sustained gunshot wounds during the incident.
The incident occurred hours after the Lagos State Governor, Babajide Sanwo-Olu, announced a 24-hour curfew in the state.
Reacting to the incident at the Lekki toll gate, the state government said it has begun an investigation into the incident.
Governor Sanwo-Olu also has advised the security agents not to arrest anyone on account of the curfew.
He, however, urged the residents to observe the curfew for a peaceful atmosphere in the state.​
​The governor also asked them to remain calm and​ not allow criminals, who he said have hijacked the #EndSARS protest, to succeed in​ their evil plan​ of turning the state upside down.
​He promised to do all within his power to ensure that the lives of all residents were protected at all times.
Watch videos below:

Before you come with your lies tomorrow, more 150k saw it live!!! Lekki Toll Gate Genocide. Thanks to DJ Switch.#LekkiMassacre #Genocide #BlackTuesday pic.twitter.com/C96HpO0y1s

They threw them into darkness,
They removed all the CCTV cameras,
They're shooting sporadically at them,
Yet, in their life-and-death condition they sing the National Anthem.
I cry as I type, I'm proud of my generation.#LekkiMassacre #EndSARS #Genocide' #LekkiProtest #Lekki pic.twitter.com/HLL9coOmTb

Buhari's Minister, Amaechi Apologizes To Nigerians Who Got Stranded After Abuja-Kaduna Train Broke Down