In the video circulating online, looters could be seen running around with different items and one of the thugs could be seen dressed in a judge’s robe and wig, wielding a machete. 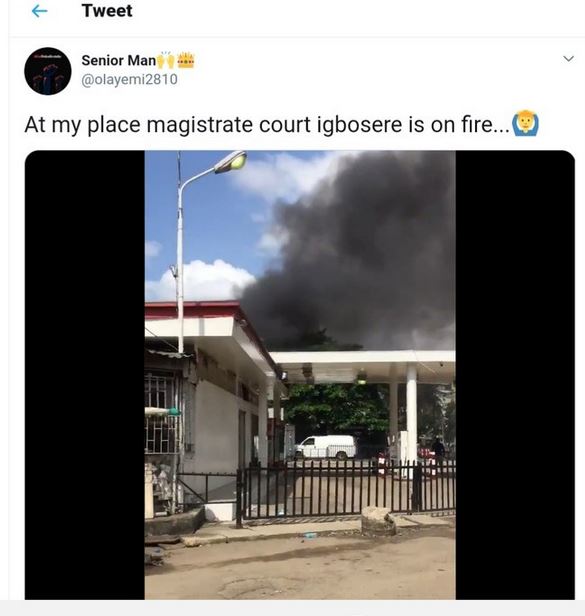 On Wednesday evening, October 21, thugs attacked a High Court in Igbosere, making away with files and documents.

The Igbosere High court attack came after violence erupted across the country, following the killing of unarmed #EndSARS protesters in Lekki, Lagos State. In a video making rounds online, one of the thugs was seen dressed in a judge’s robe and wig, with a machete in his hand.

After looting the court known as ‘temple of justice’ the rioters set it on fire.

Several public buildings in Lagos Island including the Palace of the Oba of Lagos, Oriental hotel, Lekki toll gate, the office of the Nigerian Ports Authority, banks and the family home of Governor Babajide Sanwo-Olu have all been vandalized in the last 24 hours.

It is believed pending legal cases will not be affected by the Court's vandalization as the Lagos State Judiciary now employs e-filing.

Watch the video below.;

So this one felt all he needed to steal from the high court with his cutlass was wig and gown... Omo 🤣😂.. Mad people full everywhere.. See how majestic he walking style is pic.twitter.com/5O52KbMb8Q