A popular media personality, Frank Edoho has lashed out at VP Osinbajo over a statement he released concerning the Lekki massacre. 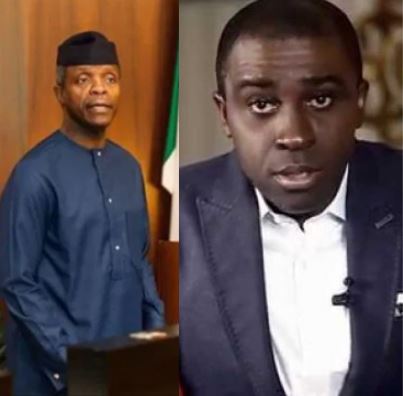 Yemi Osinbajo and Frank Edoho
Nigeria's Vice President, Yemi Osinbajo has been described as a big disappointment.
This was the view expressed by media personality, Frank Edoho who slammed Osinbajo after he released a statement in reaction to the Lekki shootings.
Yemi Osinbajo wrote: "My heart goes out to all the victims of the Lekki shootings, and also the policemen and all other men and women who lost their lives in the past few days in different parts of Lagos & other states."
Reacting to the statement, Frank Edoho quoted the VP's tweet and wrote: "With your impeccable speaking talent you have managed to be quiet throughout the tragedies of #endsars only to mutter the words, My heart goes out. Your heart goes out. Your heart na lantern?
"You are one of the true disappointments we have seen this year."
Top Stories