Before the incident, the governor marched with the protesters from the Alekuwodo area of the state capital to Olaiya junction, still in Osogbo, chanting solidarity songs with them. 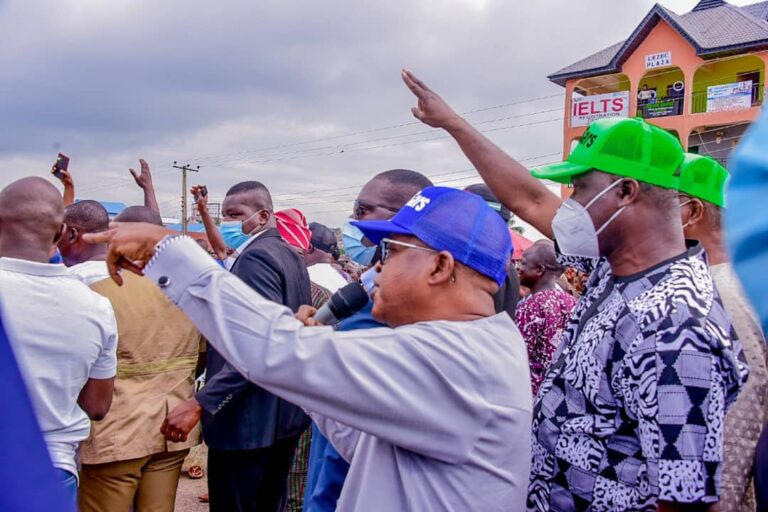 Oyetola before the incident

Sources have told TheCable that officers of the Nigeria Police Force abandoned the Osun state governor, Gboyega Oyetola and failed to provide cover for him when he was attacked by a mob on Saturday.

The governor was addressing #EndSARS protesters in Osogbo, the state capital, when stones and different objects were thrown towards his direction and he was immediately escorted to his car.

As the governor’s convoy found its way out of the protest ground, some young men with dangerous weapons descended on the cars but Oyetola and members of his cabinet managed to escape.

Before the incident, the governor marched with the protesters from the Alekuwodo area of the state capital to Olaiya junction, still in Osogbo, chanting solidarity songs with them.

He was addressing the crowd when the situation got out of hand.

Sources within the governor’s office said a deputy commissioner of police (DCP) in the state had assured Oyetola of adequate security before he met with the protesters.

According to the sources, it was based on the police assurance that the governor proceeded with the move.

“Before we left for the venue of the protest,  the Osun police commissioner, through his representative, encouraged Mr. Governor to go and address the protesters, promising to provide cover for him. That I can confirm,” one of the sources said.

“But surprisingly, the police did not deploy enough officers to a protest of that magnitude. We did not see the police cover when the crisis broke out. The governor was practically exposed to danger.”

Another source said the police gave Oyetola two options about the protest.

“The DCP who met with Mr Governor said he could either meet with the protesters at the government house or address them at the protest ground,” the source said.

“He assured him that adequate security arrangements had been made and things were under control. But when the crisis broke out even the DCP was nowhere to be found.”

But Yemisi Opalola, police public relations officer (PPRO) in the state, countered the information that the police did not provide cover for Oyetola.

“That’s not true. How was the governor moved to safety if the police didn’t provide cover? How was he able to escape from that place? Who evacuated him? Was it not the police?” she told TheCable over the phone.

Asked to comment on Opalola’s claim, one of the sources said: “Please ask the PPRO who is obviously trying to defend her job if anyone was arrested over the attempt on the governor’s life. Up till now, not one person has been arrested.

“She is not saying the truth. Videos of the incident are out on social media. Please check if you’ll find policemen around the governor. It was his security aides who rescued him. The police abandoned the governor when it mattered most.”

When TheCable contacted Ismail Omipidan, chief press secretary to the governor, he simply said: “There were security lapses but we have gone past that stage now. My principal escaped unhurt and no one was killed at the protest ground. We are grateful to God for that.”

In a statewide broadcast one day after the attack, the governor blamed the incident on “political thugs”, saying young persons who voted him into office could not have turned against him.

“What happened on Saturday is objectionable, unacceptable and a blight to the Omoluabi ethos that the state of Osun stands for. Osun youths who are the original #EndSARS protesters… this assassination attempt could not have come from them. The protesters engaged in peaceful demonstration for the first two days before it was later hijacked in the last five days,” he had said.

Oyetola , who said government was on top of the situation, added that the perpetrators of the dastardly act would be brought to justice.