Nigeria's President Muhammadu Buhari has been criticized over the manner he has handled protests in the country. 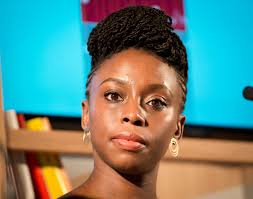 Chimamanda Adichie
President Muhammadu Buhari has been slammed by a popular writer, Chimamanda Adichie over the manner he has been responding to issues in the country.
Recall that Nigerian youths have been protesting against police brutality and extortion for weeks using the hashtag #EndSARS.
Adichie while reacting to protests and shooting of protesters in the country, said President Muhammadu Buhari acts like engaging Nigerians is beneath him.
She said that the president remained “malevolently aloof” like he does not care if the nation burns to the ground around him.
She stated these in an article published by the New York Times hours before President Muhammadu Buhari addressed the nation on the EndSARS protests.
In the article titled, ‘Nigeria Is Murdering Its Citizens’, Adichie said, “The government of President Muhammadu Buhari has long been ineffectual, with a kind of willful indifference.
“Under his leadership, insecurity has worsened; there is the sense that Nigeria could very well burn to the ground while the president remains malevolently aloof.
“The President himself has often telegraphed a contemptuous self-righteousness, as though engaging fully with Nigerians is beneath him.”
Adichie, who wrote on the EndSARS protests, said some of her relatives were victims of the brutality of the now-defunct Special Anti-Robbery Squad (SARS).
“In the first week of the protests, the President sent out a tweet and then gave a flaccid speech about ending SARS. The inspector general of police has announced that SARS has been scrapped, but the government has announced the dissolution of SARS a few times in the past, starting in 2017.
“Because Nigerians are so accustomed to the two-faced nature of their governments, to promises destroyed even before being made, it is unsurprising that the protesters distrust the government and are demanding clear actions rather than words,” the award-winning writer wrote.
Reacting to Tuesday’s attack on peaceful EndSARS protesters by soldiers, Adichie wrote, “The Nigerian state has turned on its people. The only reason to shoot into a crowd of peaceful citizens is to terrorize: to kill some and make the others back down. It is a colossal and unforgivable crime. The brazenness is chilling, that the state would murder its citizens, in such an obviously premeditated way, as though certain of the lack of consequences.”
Top Stories