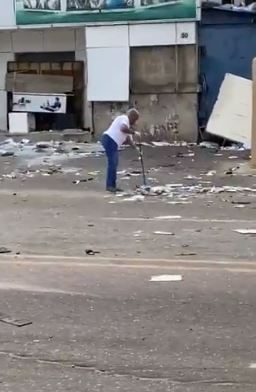 An elderly woman was spotted cleaning up a street filled with trash after looters looted in Surulere.

A video of the nearly-empty street shows trash all over the floor. Discarded packages of goods stolen from malls, papers, and other wastes littered the street.

The usually busy street was quiet, with only a handful of people seen outside.

Amongst the few people seen outside is the elderly woman, but she isn't walking away like the others, instead, she's seen with gloves and a broom, sweeping the street.