Chukwuemeka has been enduring such a dreary lifestyle since shortly after his birth when his head started swelling rapidly. 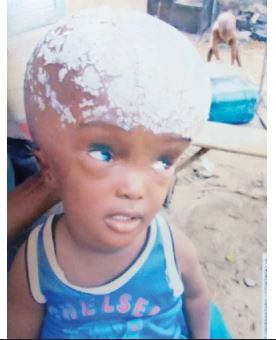 He is only four years old and should be enjoying his childhood with dexterity but, Chukwuemeka Isu is far from living the kind of boisterous life his peers at Akigbo in Ebonyi State live on a daily basis.

The PUNCH reports that Chukwuemeka has been enduring such a dreary lifestyle since shortly after his birth when his head started swelling rapidly.

He was taken to a hospital for a test and was later diagnosed with hydrocephalus – accumulation of fluid in the cavities deep within the brain.

As months went by, the condition became worse and deprived him of the exuberance expected of a child.

“The problem started some months after his birth. He underwent surgery before but doctors said he needed to undergo another surgery,” his father, Henry Isu, told City Round. “I have been looking for money to pay for the surgery. The first one cost us about N500,000 at the University of Nigeria Teaching Hospital, Enugu.”

As the family continues to search for means, Chukwuemeka is pitiably confined to his sickbed at home, unable to walk or sit by himself.

Henry said, “We are asked to make a deposit of N500,000 for another surgery. I don’t know how much it will cost eventually because we have to buy drugs too. The condition disturbs him a lot. His peers have already started school but he has not been able to start. He gets sick often and has been on drugs. The condition doesn’t allow him to sit or walk.”

Worse still, the little boy battles the harrowing experience without a mother to soothe his pains.

“His mother and I are not together again. We didn’t have any issues. I suspect she is tired of the boy. She left about two years ago and people have advised her to come back because of the child but she has refused to do so,” Henry, 31, added.

He appealed to Nigerians to come to Chukwuemeka’s aid and give him a chance to live a normal life.

He said, “I just graduated from school. I was supposed to have gone for the National Youth Service Corps scheme but because of his condition, I have not been able to do so.”