The speaker has directed his lawyers to set up a trust fund for the children of the deceased until adulthood. 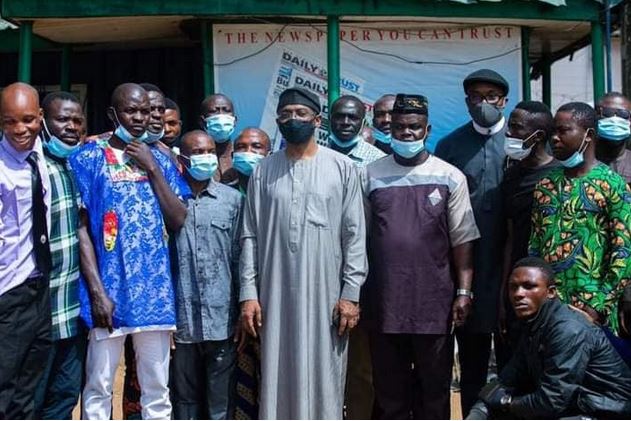 Hon. Femi Gbajabiamila, The Speaker of the House of Representatives, has offered scholarship to the children of late Ifeanyi Okereke, a newspaper vendor who was killed by one of his security aides.

The Speaker and his entourage were passing through a road in the Federal Capital Territory when one of his security details, Abdullahi Hassan, fired a gunshot into the air to disperse some of the vendors who approached the speaker to greet him. The bullet hit Ifeanyi who died from gunshot wounds.

Gbajabiamila over the weekend paid a condolence visit to the family of the deceased where he met the wife who is nursing a baby they just welcomed.

The speaker on Sunday, November 22, met with members of the Abuja Newspapers Distributors Association (ANDA) and the Newspapers Vendors Association, Abuja (NVAA) to condole with them over the death of their colleague, Okereke.  Gbajabiamila said after a visit to the family of the late Ifeanyi at the Kwata area of Madalla-Suleja on Saturday, where he met with his wife and children, he directed his lawyers to immediately set up a trust fund for them until adulthood.

''‘Let me address you not as the Speaker but as Femi Gbajabiamila a citizen of the Federal Republic of Nigeria, who has been caught unawares in the middle of this unfortunate incident. Many of you that have been following me from the beginning know that championing the cause of the masses has been my life work as a legislator. I have been a champion of the common man and therefore the irony of this is not lost on me and many of us. However, I will continue to do this as long as I live.

“This is a very difficult time for me. Like many have said, you guys have been my friends for years. I have no idea and I don’t know why you guys have always taken to me over the years including campaigning for me in the streets of Abuja during the speakership election. You’ve always been there for me. As you were selling your papers, you were also selling me.

“That’s why each time I pass you guys , I stop to say hi. Some people said why did I stop in the middle of the road? But as we were moving, the lights changed to red which meant to stop. We could have moved on, but I have always instructed my convoy to be law- abiding. So, we stopped and my friends, as usual, besieged the vehicle, shouting and were jubilant".

Recalling the incident, he said after he had made inquiries about the gunshot, he was initially misinformed but later received the accurate account of the incident.

“Immediately I heard the gunshot, I screamed and said why did they do that? At that time I thought it was just a shot into the air. As we moved on, I asked that they should park the car. It’s against security training as they made me realise, but I insisted and they parked. They said everything was okay. Indeed some other road users behind us did say everything was okay. We moved on. It was later that night that I got the full gist of what had happened. I want to commiserate with you over what happened.”

“Those children have now become my children. I have made commitments to the family to train them until they become adults. I have instructed the lawyers in my office to immediately set up a trust fund for them until adulthood.

The incident has touched me in no small measure and in ways difficult for anyone to understand. I am a man of peace and not violence. Also, I have cancelled all my engagements, because I’m indeed mourning, and I can’t be mourning and be celebrating or attending joyous occasions or functions at the same time.’’he said

In his remarks, the Chairman, House Committee on Media and Publicity, Hon. Benjamin Kalu, thanked the union for refusing to allow the situation to be hijacked by hoodlums.

He said the conduct of the vendors had changed the image of vendors by their quality leadership and members.

He suggested that November 19 every year be remembered as “Vendors’ Day” and be celebrated with lectures and symposia.

The Chairman of the group, Mr. Benjamin Obute, commended the humility displayed by the speaker, the first occupant of such a position to visit the Newspaper Distribution Centre in Area One in Garki District of Abuja.

He said the speaker, who spent three hours in traffic on his way to Suleja on Saturday to see the family of the deceased, had met most demands made by the vendors.