A newborn baby has been welcomed by the Oba of Benin and his wife, Queen Owamagbe. 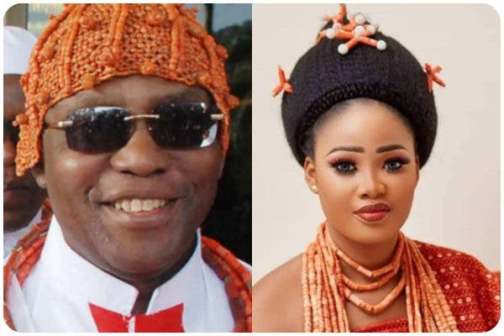 Oba of Benin and wife, welcome baby girl
Queen Owamagbe, one of the wives of Oba of Benin, Oba Ewuare II has given birth to a bouncing baby girl.
The princess' birth coincides with Oba of Benin's birthday and coronation anniversary.
A statement signed by Frank Irabor, Secretary, Benin Traditional Council, and made available to journalists in Benin on Monday, said the princess was born on Oct. 20.
The statement explained that the announcement was delayed till now because of the tension raised by the #EndSars protests of October.
“The Benin Traditional Council, on behalf of His Royal Majesty, Oba Ewuare 11, and the Royal Palace of Benin Kingdom, joyfully announces that her Royal Highness, Queen Owamagbe of Benin Kingdom, has been delivered of a baby girl.
“The infant princess and her mother are in excellent health and good spirit.
“It is our prayers that the princess will grow in good health, excellence and grace and that she shall be blessed by Almighty God,’’ the statement said.
Top Stories