A young Nigerian lady who died after allegedly being shot by soldiers in Rivers state is to be buried this weekend. 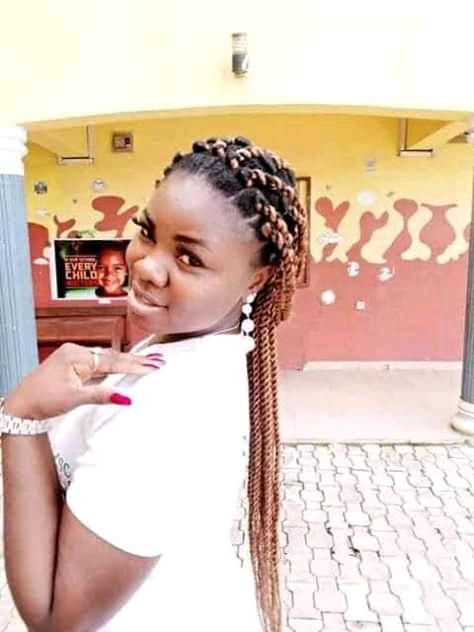 Nwazuo
It is a difficult time for the family members of Miss Queen Nwazuo following her untimely death in Rivers state.
Nwazuo is the lady allegedly shot dead in Oyigbo in Oyigbo Local Government Area of Rivers State during a military operation which followed the killing of soldiers allegedly by members of Indigenous Peoples of Biafra, IPOB, in the area would be buried this weekend in her home town, Asa,  Abia State.
Nwazuo, who was scheduled to get married to Monday Bakor sometimes in February 2021 died almost 24 hours after she was shot because of lack of medical help because of the 24-hour curfew imposed on the area during the military operation.
Despite claim by the military to the contrary, Bakor had insisted that the bullet which killed his intended wife was fired by soldiers deployed to fish out suspected members of  IPOB in Oyigbo.
Attempt by her family to seek justice and  compensation at the Rivers State Judicial Commission of Inquiry addressing acts of violence Brutality Murder and Violation of Fundamental Rights of citizens by the Police was dismissed on Friday November 27.
The panel had argued that it was constrained by its mandate to entertain only matters related to police brutality and not those involving the military.
However reacting to the use of the terms “allegedly” and “stray bullet” in the media in reference to the killing of his fiancée,  Bakor on Monday angrily said:
“Don’t use the word ‘”alleged”,
She was killed right inside the shop,
Don’t use the word “stray bullet”,
It was a deliberate act, a gunshot directly at the shop is not a stray bullet.”
In a heartrending Facebook post on his timeline in remembrance of his fiancee’s last birthday celebration, Bakor wrote:  “This is when we all came together to celebrate your birthday, I never knew an unprecedented session like this would come where I’ll be wearing one boxer and shirt for a month plus now for something I didn’t bargain for, I haven’t slept a night without taking a sleeping pills.
“I never knew that an untrained, unprofessional cop would cut short your life for absolutely nothing,
“I hereby call on his Excellency Governor Nyesom Wike, the governor of Rivers State and all meaning Nigerians that value life to lend their voice to this this evil done to my fiancée, it might be anyone tomorrow.
“What’s her offence to deserve this kind of treatment? Why would she die for nothing?”
Top Stories