The wife of the Ooni of Ife, Oba Adeyeye Enitan Ogunwusi has left fans speechless with her dress during her son's naming ceremony. 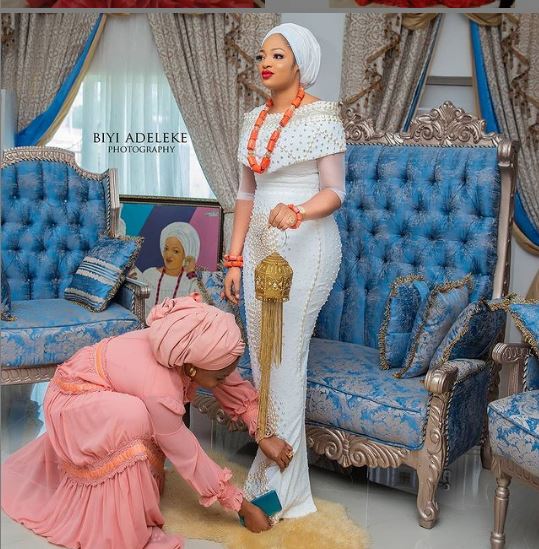 Olori Silekunola Ogunwusi stuns in dress she wore to her son's naming ceremony
Olori Silekunola Ogunwusi has shown she's a woman of class and high taste after the dress she wore to her son's naming ceremony surfaced online.
Recall that the Ooni of Ife, Oba Adeyeye Enitan Ogunwusi had recently taken to his social media page to announce the birth of his son.
However, his naming ceremony was held on Wednesday.
The dress worn by Olori Silekunola Ogunwusi for the naming ceremony was magnificent and represents everything she stands for. While the focus has been on the queen, the person behind the stylish dress is none other than Abiodun Folashade Tokunbo, better known as Luminee.
Luminee, who has made great strides in the fashion world, didn’t just make the queen’s dress she also acted as her stylist for the joyous occasion.
She wrote on her Instagram page: “Congratulations my precious queen on your prince’s naming ceremony today. My prince your voice shall be heard all over the world, nations will serve you, you will continue to be a source of joy to your family, no evil shall befall you, and you will succeed in life.”
Meanwhile, Oba Ogunwusi named his son after the 49th Ooni in the third dynasty of Ife, Oba Adesoji Tadenikawo Aderemi. The monarch explained that naming his son after Oba Aderemi, was in fulfillment of a promise he made.
See the post below: