A hilarious video has surfaced showing the moment a groom got angry because his bride at the food she was supposed to give him. 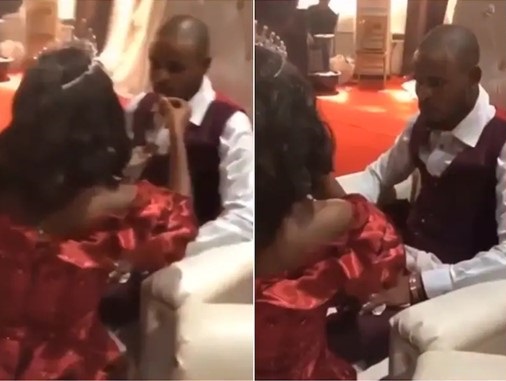 The groom got angry after the bride ate food she was supposed to give him.
A groom has expressed dismay after his bride went ahead to eat the food she was supposed to serve him at their wedding reception.
The hilarious video has left many social media users rolling on the floor in laughter.
The newlyweds were calmly sitting at the reception venue of their wedding, so when It was time to feed the groom, the new bride was seen kneeling while her man sat on a beautiful white chair.
Rocking a pretty red outfit, the bride took some finger foods and was ready to feed her husband but did something unexpected.
As she made to put the food in her lover’s mouth which was already opened, the bride quickly withdrew her hand and put the food in her mouth instead.
Watch below: