Those Killed In Zarbamari Were Boko Haram Informants, Not Farmers – Community Source Speaks


The recent attack which was believed by many to be on rice farmers elicited commentaries and condemnations from all spheres of life. 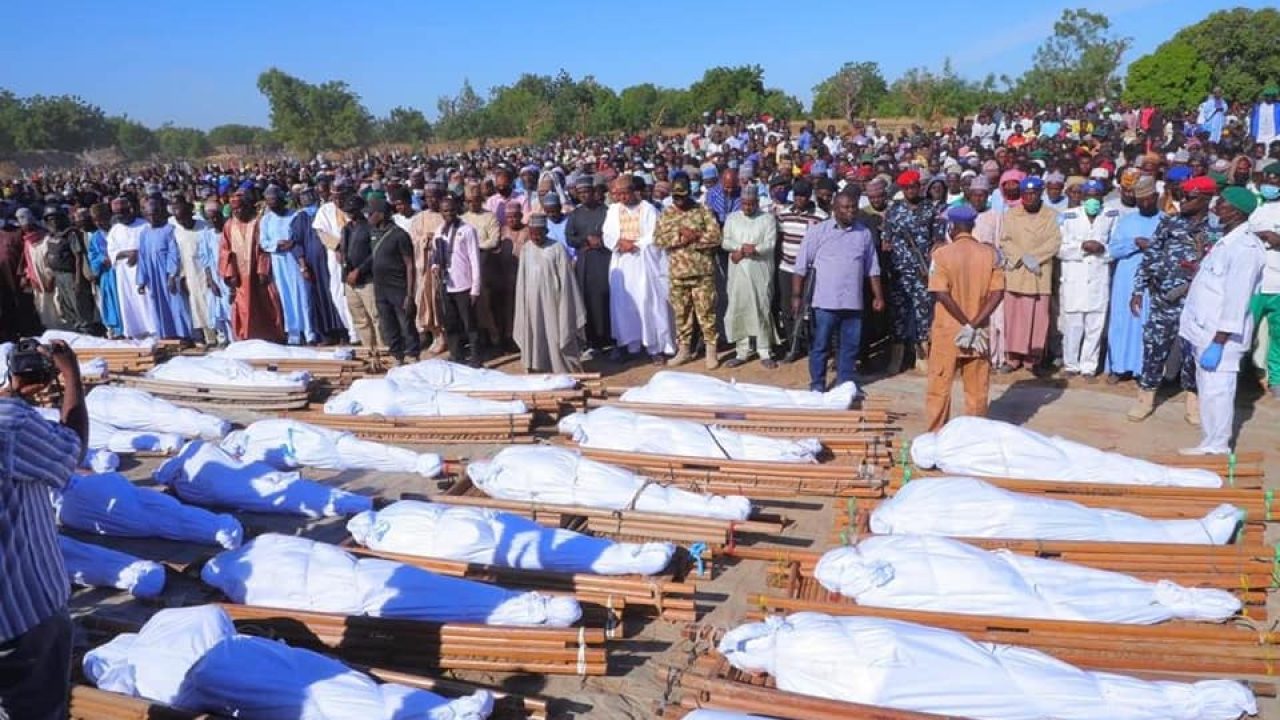 The victims being buried

According to community sources, the people who were massacred in Zarbamari were not farmers.

According to a report by Daily Post, contrary to the belief that victims of Boko Haram attack last Saturday in Borno were rice farmers; fresh facts have emerged on Friday that they were informants and logistics suppliers to the insurgents.

About 48 persons were reportedly slain on Saturday morning in Zarbamari, a town in Borno State, North-East Nigeria, by the Boko Haram insurgents, who later claimed responsibility.

The recent attack which was believed by many to be on rice farmers elicited commentaries and condemnations from all spheres of life.

Prof. Babagana Umar Zulum, Governor of Borno State, had also on Thursday, disbursed the sum of N600,000 to family members of each of the slain farmers, while North East Governors donated N20m and North East Development Commission (NEDC) gave N5m to the families.

But Mallam Kabiru Zanna, a local of Zarbamari, who spoke with this correspondent on Friday morning, said those affected were mainly collaborators of Boko Haram who hailed from Zamfara and Sokoto States and not farmers.

“The people that were killed were logistics suppliers and collaborators with Boko Haram. They supply them food and fuel. They also help the insurgents in selling rustled cows”, he said.

Zanna who spoke in Hausa language also gave details of what transpired on the fateful Saturday and how the transaction between the insurgents and their erstwhile collaborators went awry.

“Last week, these same people were on their way to meeting the insurgents for business when they were accosted by soldiers and after the soldiers couldn’t find anything on them they let them go.

“Meanwhile, the insurgents who were waiting saw them with the troops who later killed 5 of them after an ambush, so the insurgents accused those guys of providing Intel to the soldiers. This is the main reason why the terrorists began killing them.

“The insurgents called them to meet on Thursday but they said they wouldn’t be able to make it until Saturday. They agreed to meet early morning 5:00am on that day. They even had their morning prayers there.

“From there, the insurgents began to tell them about those guys who used to supply them food, who also betrayed them by providing Intel to the troops.

“Normally if there are betrayers in a town the entire community would pay the price for such acts. At that moment, the insurgents ordered that everyone be tied. They instructed that no gun should be fired in other not to attract troops.

“That was exactly what happened. Those people mostly are collaborators of the terrorists”, he added.

Zanna, who has been keeping tabs with activities of Boko Haram in the state, said, though some that were killed were innocent, “but very few of them. I swear most of them are traders with the insurgents. None of them is a rice farmer, they are all in trade with the insurgents”.
When contacted on phone, a Media Aide to Governor Babagana Umar Zulum, Mr. Ahidjo Abdu Likita, confirmed the revelation.

“Yes, it has been confirmed that the victims slaughtered were agents of Boko Haram”, he told our correspondent on phone, adding that, further investigation was being carried to reveal more.

When asked why the Governor went ahead to disburse money to perceived family members of the victims, since they were collaborators, Likita said, “the Governor didn’t know the reality of the scenario till today”.

He said, “everybody was thinking it was the real people of Zabarmari village” until the information got to the Governor this morning.