A professor has found himself in serious trouble after reportedly engaging in electoral fraud. 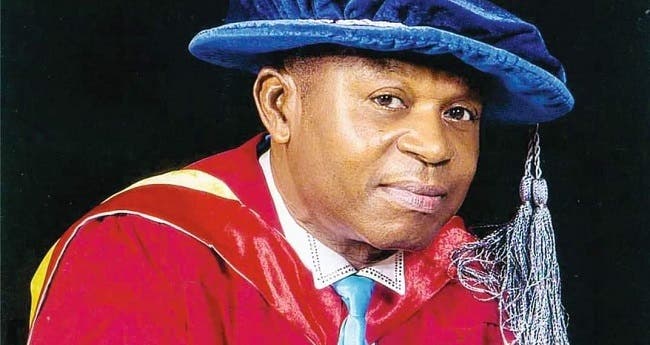 Uduk
A fleeing Collation and Returning Officer (CRO), Professor Ignatius Uduk has been rearrested and arraigned in court.
The Independent National Electoral Commission (INEC), Akwa Ibom State rearrested and arraigned the professor for allegedly declaring false election results in the 2019 general elections.
Prof. Uduk was said to have declared and published false election results during the 2019 State House of Assembly elections when he served as the Collation/Returning Officer in Essien Udim Local Government Area.
Uduk who had threatened court action against INEC when he was asked to face the election petition tribunal set up for that purpose, was issued a bench warrant before he appeared in court on Wednesday in Uyo, the Akwa Ibom State capital.
The University of Uyo (UNIUYO) professor was arraigned under charge no: HU/240c/2020, on a three-count charge of abandonment of duties and generation of false scores on form EC, BE (II) on 10th March 2019 at INEC office in Afaha Ikot Ebak, headquarters of Essien Udim Local Government Area during the state House of Assembly elections; announcement and publication of false election result; and lying on oath at the inception of the Election Petition tribunal.
He pleaded not guilty to the three-count charge preferred against him, while his Counsel, Samuel Ndah prayed that the Professor be granted bail.
Counsel to INEC led by Kpoobari Sigalo, who had filed a counter-affidavit, however, objected that the defendant should not be granted bail as he had proven the fact of being evasive, adding that the court should follow the plea of accelerated hearing on the matter.
“Last time we were before this honourable Court and the Court issued a bench warrant against the accused. I am very sure that it is because of the bench warrant that he (accused) filed an application for bail.
“So, today he actually came to court and took his plea and his counsel has asked for his bail. We actually opposed to that bail application. When we filed our counter affidavit in opposition to the bail as we saw in Court that the matter has been adjourned to 14 December for ruling on that very application.
“The character of the accused person actually prompted us to object his application for bail. This is not the first matter we are prosecuting. The other one we did not oppose the bail application because the accused person on his own volition came to court.
“Before the last general election, the Commission said it very loud and clear that whosoever that contravenes the Electoral Act of the 1999 Constitution and other guidelines of the electoral process will be severely dealt with,” he stated.
The Presiding Judge, Honourable Justice Archibong Archbishop adjourned the case to 14th December 2020 for ruling on the bail application as requested by counsel to the defendant.
Top Stories