Army Chief, Buratai Seen Posing With Snake In His Farm As He Keeps Mum On Katsina Abduction (Photo)


The Acting Director, Brig-Gen Sagir Musa, shared Buratai's photos on Wednesday evening, which showed the army chief beaming with smiles, as he held the large python by the neck and tail, posing for the camera. 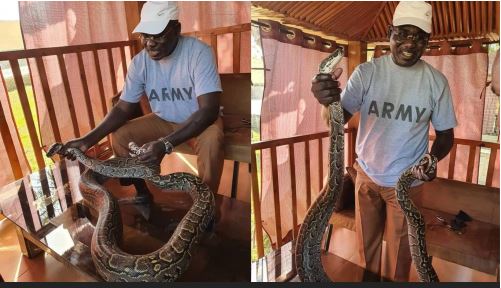 Buratai and his snake

Lt Gen Tukur Buratai, the Chief of Army Staff, has been posing with a snake.

Buratai visited his snake farm along the Keffi-Abuja Expressway in Nasarawa State and posed with a large snake, amidst the COVID-19 isolation which he and other top army officers are still observing.

The Acting Director, Brig-Gen Sagir Musa, shared Buratai's photos on Wednesday evening, which showed the army chief beaming with smiles, as he held the large python by the neck and tail, posing for the camera.

It has been a week since gunmen invaded a government school in Kankara, Katsina State, abducting over 300 schoolboys and Buratai had not made a public comment, amidst calls for the sack of the perceived inefficient service chiefs.

In some photos also shared on the Facebook platform, Buratai paid a visit to his snake farm, days after President Muhammadu Buhari in the wake of the Kankara abduction was also sighted on his cow farms, despite not visiting the grieving school.

SaharaReporters had earlier also reported that the Keffi-Abuja road is listed as one of the worst roads in Nigeria notorious for kidnapping and bandits activities.

"The Chief of the Army Staff visited his snake farm today," Musa wrote on a Whatsapp platform, showing Buratai's pictures, despite the army's spokesman not forthcoming on the steps taken by the military to rescue the abducted schoolboys.

Only on December 13, more than 25 Nigerian Army generals had tested positive for COVID-19.

The generals believably contracted the virus after he earlier came in contact with Major General Olu Irefin who died from COVID-19 complications last week.

The affected senior army officers were attendees of the 2020 Chief of Army Staff Annual Conference at the Nigerian Army Resource Centre in Abuja, who were tested by officials of the NCDC.

The late General Irefin had reportedly visited some of his colleagues at home before he attended the conference.

As a result, Buratai, all the officers who attended the conference, their wives, and other members of their families who live with them, have been directed to isolate themselves for a week by the Nigeria Centre for Disease Control.

The venue of the aborted conference – the Nigerian Army Resource Centre in Asokoro – has also been decontaminated by health officials at the weekend.

A day earlier, gunmen suspected to be bandits attacked Kankara, Katsina State, as President Buhari paid his first visit to Katsina State, where he hails from, in 2020.

Till now, for reasons not yet known, the President had chosen not to visit the school or have an audience with the grieving parents.