Angry youths in Ibadan have confronted and killed a suspected armed robber after setting another on fire. 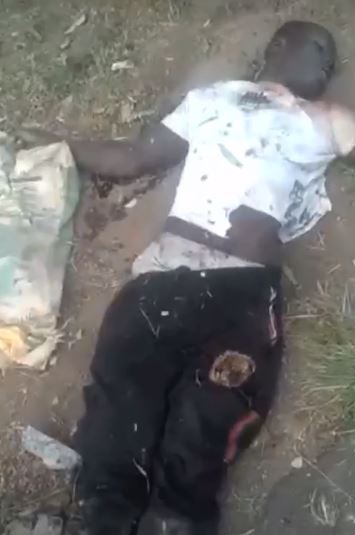 The lynched robber in Ibadan
An armed robber has met a violent death after being lynched by a mob along Agodi Government Secretariat, Ibadan.
It was gathered that he was tortured by the angry youths in the community before they killed him.
Another was also set ablaze
Sources said the duo allegedly robbed an unsuspecting member of the public in his car at about 6:00 pm around the Agodi Secretariat axis.
According to an eye witness who craved anonymity, the alleged robbers were trailed by some yet to be identified youths to Agodi Secretariat after they had robbed the businessman of a sum of N5 million.
The witness explained that the youths who had given the suspected robbers a hot chase eventually nabbed them along the Parliament Road and attacked them with dangerous weapons.
They have firstly beaten blue-black, which resulted in their death. One was consequently set ablaze, while the corpse of the other was left lying on the road.
The situation sent shock and fears among motorists and other road users approaching the axis, especially those at the popular Agodi Gardens.
The witness, however, noted that the men of the Operation Burst who were on their way for another operation had a stopover at the scene of the incident before they later zoomed off.
Men of the Amotekun Corps, were, however, mobilised to the axis, manning the security patrol in two vans from the Agodi Secretariat Gate towards the Agodi Gardens down the Parliament Road.
Watch video below:
Top Stories