The protest was led by some national leaders of the group, as the protesters were seen carrying placards to demand the release of the boys. 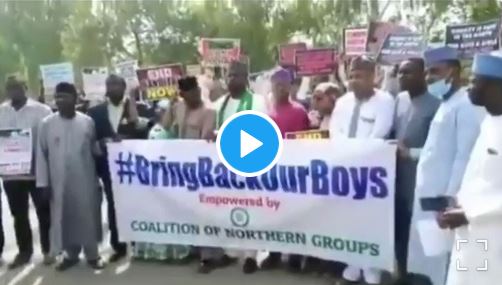 On Thursday, December 17, the Coalition of Northern Groups (CNG) stormed the streets to demand the immediate rescue of the hundreds of students kidnapped from Government Science Secondary School, Kankara in the state.

The protest was led by some national leaders of the group, as the protesters were seen carrying placards with inscriptions such as “BringBackOurBoys;” “government must speak out;” and “We want our children back” amongst others.

The Board of Trustees Chairman Nastura Ashir Shariff said it is already in touch with parents of the abducted school children and assured them of support through this hard time.

Spokesperson of CNG Abdul-Azeez Suleiman, said, “It will be unreasonable to expect any northerner and well-meaning Nigerians to fold their arms and watch the North, a significant component of the country abandoned to the mercy of bandits and kidnappers”

He added that “the police in Katsina is seen in a massive reinforcement around the state which calls for caution on the part of authorities against attempts at suppressing legitimate protests that will be conducted peacefully.”