Yusuf and 16 other corps members were attacked along Jere-Abuja Expressway after leaving Ede NYSC Orientation Camp in Osun State. 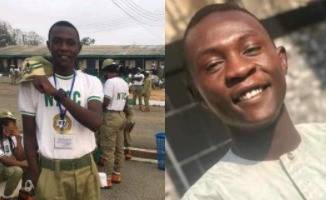 Some angry Nigerians have taken to social media to urge the government to scrap the National Youth Service Corps (NYSC) scheme, insisting that it has outlived its usefulness.

This followed the killing of a corps member, Bomoi Yusuf, by gunmen suspected to be kidnappers on Tuesday.

Yusuf and 16 other corps members were attacked along Jere-Abuja Expressway after leaving Ede NYSC Orientation Camp in Osun State.

Quite a number of Nigerians on Twitter who condemned the attack on the corps members said the NYSC scheme had deviated from the objectives for which it was established.

They described the scheme as the fastest way for graduates to meet their ‘untimely death’.

For instance, someone whose Twitter handle is @JMaigamu, wrote: “The NYSC scheme needs to be completely suspended until when the security situation in Nigeria improves. Fresh graduates should just be issued an exemption certificate to use instead.”

@ONikhua said, “No, it does not (have any relevance), especially in the last decade. The only thing that has been known to bring Nigerians together, irrespective of ethnicity and/or religion is when the national football team is playing and that too is also being threatened.

“The violence after the 2011 elections nailed the coffin of the NYSC. Southerners didn't want to go north because of the sporadic, mindless violence that may occur at any time for no just cause, and I'm not talking about the current banditry/herdsman/Boko Haram issues. Some northerners feel the south is too liberal for their taste.”

“How many innocent graduates will die before Buhari and co scrap this moribund scheme?” @Abayomi034 asked.

@Greg234237246, who advised that the NYSC authority should suspend the scheme till the security situation in the country improved, added, “We can't continue to lose our young and vibrant youths to bandits and kidnappers; a word is enough for the wise.”

@YarKafanchan wrote: “Nigeria not cancelling NYSC or changing the format in the face of growing insecurity thereby risking the lives of millions of youths is yet another sign of how callous and wicked this country is.”

“Why are corps members still being posted to the North-East and North-West regions? Those areas have too many ungoverned spaces and are high security risks. The NYSC should have a safety framework/guideline/protocol,” @iSERVE2050 said.

Another Twitter user, @Agbor70, said, “I keep saying NYSC should be abolished or people should be made to serve in their various states of origin or better still, in the states where they had their university education. Many poor souls have lost their lives travelling up and down for service.”

“Isn't it time we scrap this programme?” @TheyvidA asked.  “The amount of people that have been killed because they went for NYSC is mind boggling. It has lost its purpose.”

In the same vein, @seundann said: “If you are from the South and they post you to the North. You better don't go. Just forfeit the rubbish. After all, many who are in the Senate forged NYSC certificates. Nigeria is not worth dying for, the crop of leaders we have are major criminals. Please stay alive until it's better.”

@ThePeoplesParl1 also wrote, “You (see) why I've always advocated that this useless programme should be scrapped and replaced with a skill training (programme) that will make our graduates useful to themselves. With the current security situation in this country, why are you risking the lives of our graduates?”

@ambalindus said, “Now your suffering continues (NYSC) should be scrapped. Why is it difficult for Nigeria to embrace change? We've had NYSC for God knows when; the disadvantages outweigh the advantages, why not scrap it?”

“This programme should be scrapped... it's causing more harm than good or better still; everyone should serve in his/her state after all, one Nigeria is obviously a scam,” @erikuzee said.