Iran To Arrest Trump for Killing Its Top General, Soleimani


President Trump of the United States may be in trouble when he leaves office this month. 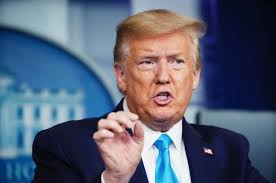 Donald Trump
Outgoing President of the United States, President Donald Trump might end up getting arrested after Iran filed a 'red notice' at interpol.
Trump is accused of killing Iranian top general Qassem Soleimani a year ago.
Iran’s justice spokesman Gholam Hossein Ismaili disclosed this on Iranian state television on Tuesday.
“In this regard, we have filed a ‘red notice’ at Interpol against 48 people, including Trump, U.S. commanders, and Pentagon representatives as well as U.S. troops in the region,” Ismaili said.
There is constructive cooperation with neighbouring Iraq on the issue, the spokesman added.
Interpol, founded in 1923, coordinates policing operations for its 194 member states.
A country can use the “red notice” to request other countries to track down and arrest a person.
On Jan. 3, 2020, on Trump’s instructions, the U.S. Army killed Soleimani, who was on a visit to Iraq with a rocket attack near Baghdad airport.
The influential Iraqi militia leader Abu Mahdi al-Mohandes, the deputy head of Iraq’s Hashd al-Shaabi militia, was also killed.
Soleimani was the commander of the elite Quds Force, part of an elite unit of the Iranian armed forces.
He coordinated the activities of militias loyal to Iran in Iraq and other countries.
President Hassan Rowhani called Soleimani a national hero and he has become a legend in the region after his assassination by the U.S.
Tehran will avenge his murder “in due course” and at the same time take legal action against Trump and the Pentagon, Rowhani said.
Top Stories