Shocker! Man Bludgeons His Wife To Death Then Super-glues Her Skull Back Together To Hide Injuries


Luis Hermida claimed his partner Lisbeth Baquerizo, 30, had fallen down the stairs and died after she was found on the floor of their home in the city of Guayaquil, Ecuador on 21 December. 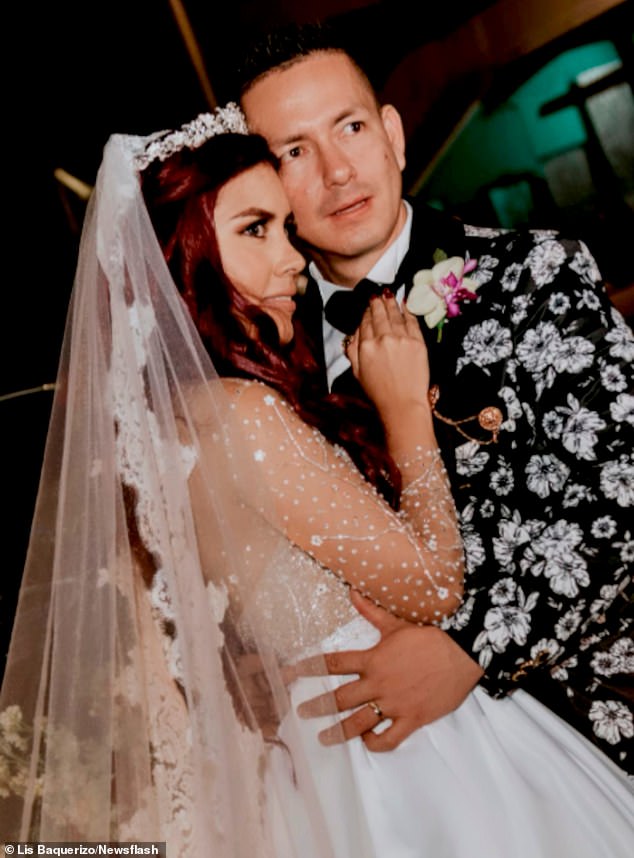 The man killed his wife

In what will come across as a really shocking development, a man has killed his own wife in Ecuardor.

The Ecuadorian police are now hunting for the man who allegedly bludgeoned his wife to death before super-gluing her skill back together to hide the injuries and make it look like an accident.

Luis Hermida claimed his partner Lisbeth Baquerizo, 30, had fallen down the stairs and died after she was found on the floor of their home in the city of Guayaquil, Ecuador on 21 December.

Lisbeth's father Mario Baquerizo was contacted by the father of the suspect who reportedly said: 'You have to come quickly. Lisbeth is dead.'

Mario and his wife Kathy Munoz rushed to their daughter's house only to find a funeral home had been contacted and a coffin was already there.
Luis's family reportedly asked the heartbroken parents not to contact the police so the funeral could be organised for the next day and they insisted they would take care of the service.

Although finding the hastiness of the funeral arrangements off, the grief-stricken parents agreed because they did not initially suspect Luis as he had been in a relationship with their daughter for 12 years, including one year of marriage.

However, the Lisbeth's mother Kathy became suspicious when she noticed an injury on Luis's eye at the wake which he claimed occurred during a mugging attempt.

Later, Kathy was approached by her daughter's friend who claimed Lisbeth had been insulted and physically abused by Luis, but did not want to tell her family.

Kathy told El Comercio she walked off in the middle of the wake and reported the incident to the authorities who exhumed the victim's body.

'They manipulated my daughter's body to set the scene,' Kathy told Metro Ecuador. after reporting the incident. 'They didn't call 911, which I now know was legal procedure.'

Speaking about discovering her daughter's body, the heartbroken mother said: 'I jumped on her, tried to revive her, but I noticed that she was already rigid, all the muscles were hardened.'

An autopsy revealed the victim died from contusions and puncture wounds at the top of her head which were then covered up by pasting them together with superglue, according to reports.

'I complained to the forensic doctor, because he had shaved my girl's head, at that moment he pointed out the wounds that would have killed her and the ones that they put glue on, surely with the intention of covering the cuts,' Kathy told local news website Extra.

The authorities labelled the case a 'violent death' and consider Luis as the main suspect.

Police chief Francisco Hernández said Lisbeth's injuries would have difficult for her to have done accidentally. He added: 'We treat this issue as if it were a violent death.'

Luis has been on the run since an arrest warrant was issued on 29th December.

Prosecutor Luis Machado, who is working the case, said the autopsy report also revealed Lisbeth suffered a 'massacre of blows' before her death.

The victim's parents said they do not want revenge, only justice.

'My daughter was a working woman, they had no right to slaughter her like that,' Lisbeth's mother Kathy said. 'They wanted to fake a domestic accident and now they want to deny us justice.'

'My heart is broken, Lisbeth was my greatest support when her sister fell ill with leukemia, with chemotherapies and a juice based on organic products, we managed to save my daughter, but we could not do anything for her,' Kathy told Extra.

'I don't understand what happened, why he did it. He and his family tried to deceive us, they lied to us, they wrapped us up, they took advantage of our pain.

'They did that whole scene, they told us my daughter had fallen. Now they don't answer the phone, they don't show their faces, just listening to the lies they have told tears my soul,' Kathy alleged.

The victim's parents claim the last thing they heard about Luis was that he was on his way to Colombia on the same day his arrest warrant was issued.