A Nigerian army commander has been exposed after detaining and torturing a soldier for over six months. 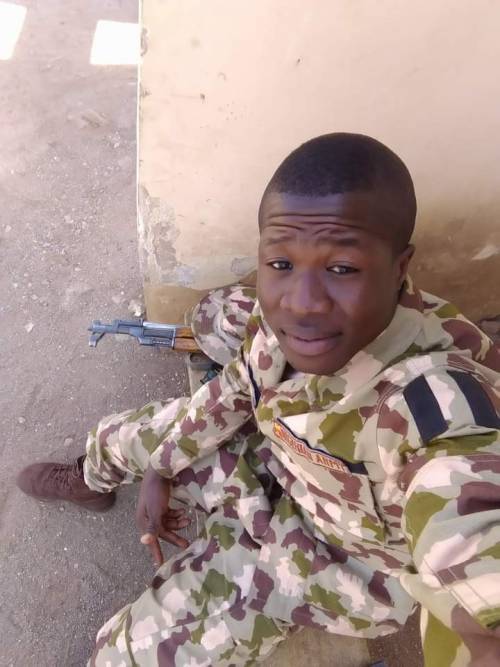 Valentino
The wife of a Nigerian soldier has been left devastated following her husband's detention for over six months by an army commander.
According to Sahara Reporters, the Commanding Officer of the 231 Battalion, Biu, Borno State, Lt. Col M.E Obi, has detained and tortured a soldier, Abobare Valentino Damilola, for over six months without trial and salary.
The wife of the soldier, Sarah Valentino, who raised the alarm, lamented that her husband is being detained and tortured without trial and denied his salaries, for going Away Without Official Leave to get one of his certificates.
She said her husband needed urgent medical attention as he had been subjected to cruel treatments, without salary, social welfare or access to his relatives.
Mrs Valentino spoke to SaharaReporters on Thursday, narrating her ordeal and recalling that several pleas and efforts for her husband to regain his freedom had not yielded any success.
According to Mrs Valentino, her husband had participated in the mandatory National Service Youth Corps in Ibadan, the Oyo State capital in 2019/2020 to use the certificate to get promotion to an Officer's Cadre in the military, having collected the Short Service Commission form.
"My husband, Abobare Valentino Damilola, with the service number 16NA/75/1969 TPR, who is a soldier of the Nigerian Army, has been detained for over six months without trial of the offence levied against him.
"He is detained for over six months for being AWOL. He has been without a salary nor allowances. He is ill, and no medical attention has been given to him. His social welfare is not being catered for and has been deprived of reaching his parents, especially his sick mother.
"The reason why he went for that NYSC was so he could be placed on an Officer Cadre position and he had collected the short service commission form. We expected that he would be released before that exam.
"My husband cannot go, and he did not want to run away from detention to go to the exam. That's the major reason he went AWOL. He wanted to use the NYSC certificate to become an officer because the way the officers are using the recruits is terrible here."'
While speaking on all her efforts to get justice for her husband, Mrs Valentino said she had petitioned some human rights agencies, but all to no avail, as the Commanding Officer turned deaf ears.
She went further to say that when her husband was critically ill last year December, it was the Emir of Borno that she contacted to appease Obi.
"In the process, it was the Emir of Borno that gave me money that I used to buy drugs for my husband. Please, I don't want my husband to die. Joining the Nigerian Army is a voluntary service, and now I don't know why this man has decided to make my husband suffer.
"He has been reduced to punishments and hard work. He is washing the RSM car. They are using him and some others to clean their houses. The most painful one is that they are using them as labourers because they are repairing their barracks. They are using them to pack rusted roofing zincs," she added.
She further stated that her husband, who got a higher national diploma in Public Health in 2015, underwent proper documentation and process before embarking on NYSC, which he first forfeited in 2016.
"He discussed it with his instructor in the military school of nursing that he would go for the compulsory three weeks orientation programme, and later he would relocate to Lagos. From there, he would be going for his NYSC monthly clearance without affecting his school programme.
"He already sent his AWOL to Army Headquarters from the school, and he was told that he had been returned to the unit (RTU), that he should go back to his unit in Borno State, that his AWOL has been sent already. And he stopped receiving a salary, up to two months.
"After finishing NYSC and returning to his base in Borno State, they conducted a Board of Enquiry to know the situation that led to his AWOL, which he told the Board. Until now, six months after, he has been in detention without trial. No salary, no allowances and he's being treated like a slave and unable to reach his family for help," she lamented.
Top Stories