After robbing the lady the hoodlums attempted to rape her but she resisted them hence they shot her. 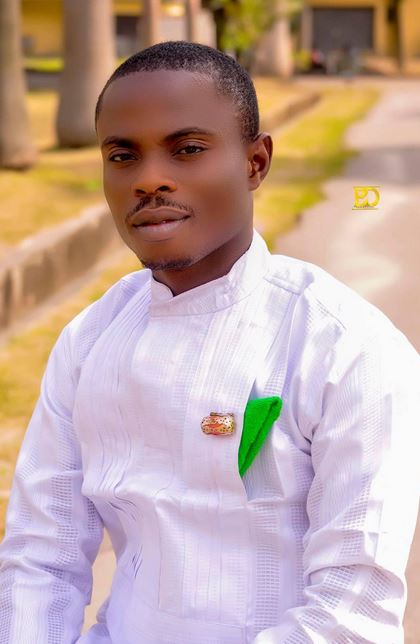 A lady was shot by robbers after she was robbed of all her valuables and resisted a rape attempt.

The incident happened on Wednesday night, January 13, at about 9:00pm in front of the public toilet close to Rivers State College of Health Science and Management Technology at Ikwerre road, Mile 4, PortHarcourt.

President of Student Union Government of the institution, ThankGod Nlenya Igwe in an interview with journalists, said students heard gunshots and rushed out of the school campus. When they got to the scene, they met the victim in a pool of blood.

She was rushed to the school clinic where first aid was administered on her before being taken to another hospital by the Police.

According to Igwe, after robbing the lady the hoodlums attempted to rape her but she resisted them hence they shot her.

"Around 9pm, we heard a gunshot around the flyover at Agip Roundabout, close to my school, and when we went out to investigate what happened, we found out that a girl was shot in her hand after she was robbed of her money, phone and all her valuables. The hoodlums were attempting to rape her when our school security came out and rescued her,” he told PUNCH.

"We contacted the police at the Sani Abacha Road divisional headquarters and a team came and took the girl to a clinic. But before the police came, we had already taken her to the college clinic, but health officials demanded a police report before they would commence treatment on her, so first aid was given to her before the police patrol team came" he added.

The SUG President said the particular spot where the incident occurred has become a den of criminal and death trap for unsuspecting members of the public.

He called on relevant security agencies and the state Government to provide security at the place the incident took place especially at night.

Meanwhile, the Chairman of the Civil Rights Council in Rivers State, Prince Wiro, who confirmed the incident, has commended the efforts of the students and security personnel.

"Our comrade, ThankGod Igwe, who is also the President of Student Union Government of Rivers State College of Health Science and Management Technology and students of the institution rescued a lady who was shot by hoodlums close to the institution few minutes ago. The hoodlums after robbing her, attempted to rape her but her refusal earned her a gunshot injury. She has been taken to the hospital by Sani Abacha Divisional Police headquarters after receiving first aid at the college. I commend the efforts of the students and the security" he said. 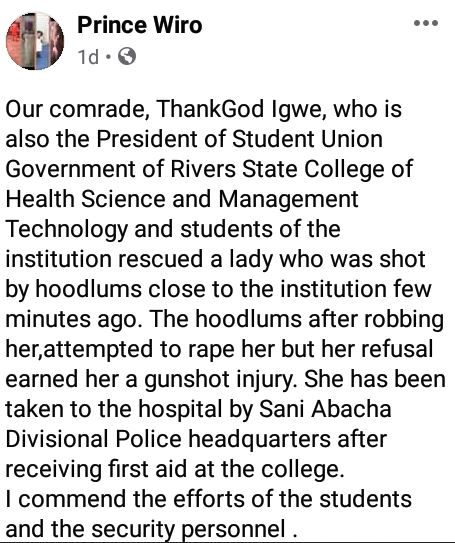