In footage she posted on Twitter, the comment can be heard as a driver in the white car lowers his window and yells in the background before Krista stops abruptly and looks to her right. 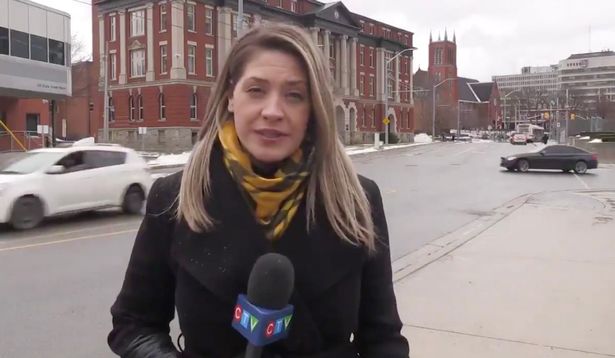 Krista Sharpe, a TV journalist has been harassed by a foul-mouthed driver live on air.

The woman was harassed by the driver who hurled a vulgar comment at her during a live outdoor broadcast.

Krista Sharpe, who works for Canadian broadcaster CTV, was filming a segment in Kitchener, Ontario, when a passing driver yelled "f*** her right in the p***y".

In footage she posted on Twitter, the comment can be heard as a driver in the white car lowers his window and yells in the background before Krista stops abruptly and looks to her right.

She takes a deep sigh and tries to compose herself.

The reporter later wrote in the post: "This is not funny and it’s not cool.

"Especially as VJ (video journalist) who is always alone. This still happens to female reporters everywhere and it needs to stop."

Chief of Police Bryan Larkin shared the clip and added: "This incident is unacceptable, vulgar and offensive. No one should be subjected to hate and bullying within workplace. Requested Investigative Services to follow up with Krista Sharpe and CTV Kitchener.

"In the interim, anyone with information, please contact Waterloo Regional Police."

Waterloo Regional Police confirmed that they are now investigating the incident as they replied: "We are sorry to see this @KristajSharpe. It is completely unacceptable. As Chief Larkin said, we will be looking into this matter."

Viewers have responded to Krista's video, defending her right to broadcast safely without harassment.

One said: "My heart breaks for you and every woman who has to put up with this. It shouldn't be this way. The pain on your face ... I'm sorry."

A fellow journalist wrote: "'I'm sorry that you had to deal with this. I'll never understand why immature people think this is funny, it's not, it's just stupid."

But some believed the phrase was part of a fake news broadcast that went viral in 2014.